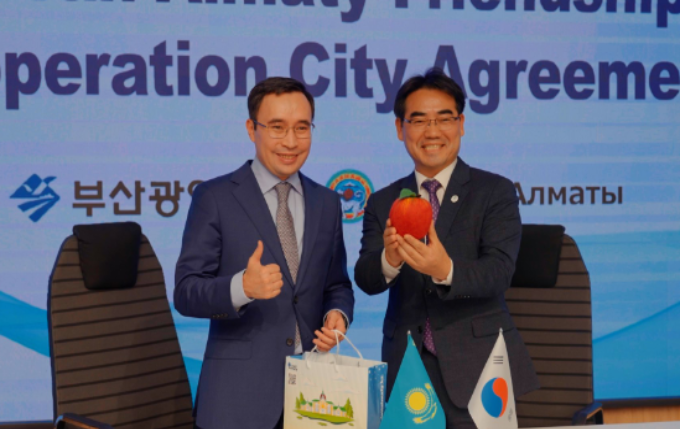 The City of Busan announced on September 14 that an amicable and cooperative city agreement was made with Almaty, Kazakhstan.

The agreement is to commemorate the 30th anniversary of establishing diplomatic relations between Korea and Kazakhstan in addition to developing the northern region markets for Busan. The agreement is the first achievement of the Eurasian Expedition, a private diplomacy delegation consisting of 55 people, which was launched on the 13th, and includes college students, Expo promotion group, and entrepreneurs.

At the agreement signing ceremony at Almaty City Hall on the same day, officials, including the Deputy Mayor for Economic Affairs of Busan Lee Sung-gwon, Busan City Council Chairman Ahn Sung-min, Deputy Mayor of Almaty City, and entrepreneurs, who participated in the Eurasian Expedition, attended.

With the agreement, both cities agreed to the mutual, amicable and cooperative expansion of diverse fields, such as the economy, culture, tourism, film, digital industry, and medical care. The promotion of mutual prosperity, development and expansion of citizen exchanges were also mentioned.

Almaty is the first Central Asian city to form an amicable and cooperative relationship with Busan. A Busan official remarked that the agreement is tremendously meaningful. In particular, the city’s effort to help local firms enter Almaty, the largest city in Kazakhstan. Busan has formed various sisterhood, amicable and cooperative relations with 38 cities in 28 countries around the globe, giving the city a vigorous diplomacy base to build off of.

The trade delegation, launched after the Eurasian Expedition, signed an agreement within the commercial activity area with the Almaty Bureau of Corporate Investment to hold export conferences, stimulating contracts worth over 3.85 million USD to 65 local buyers.

The trip ended with visits to Bishkek, Tashkent, Brussel, and Paris. Following the achievement, the Eurasian Expedition is expected to create exchanges with additional Central Asian cities, including promotional activities for the 2030 Busan World Expo as well as economic, cultural, and human exchanges.