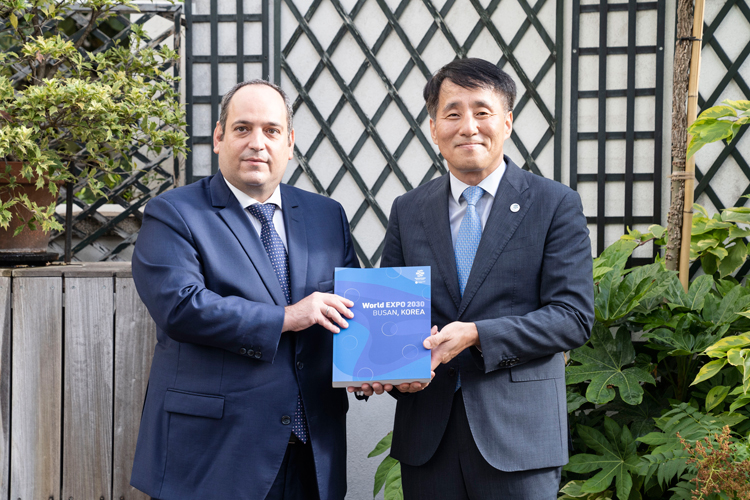 From September 6 to September 8, the City of Busan and a government delegation visited Paris, France. On September 7, they submitted the candidature dossier required to host the 2030 World Expo to the Bureau International des Expositions (BIE).

After they submitted the candidature dossier at 10:00 a.m. (local time), they were interviewed by the Secretary General of the BIE, Dimitri S. Kerkentzes.

During the interview with the BIE Secretary General, the Busan and government delegation discussed Busan's plan to host the World Expo in 2030. Busan officials emphasized the nation's strengths and capabilities to successfully host the event. They relayed the country's commitment to hosting the Expo on behalf of the Korea One Team, which consists of the government, the City of Busan, civilians, and national assembly members

The delegation continued negotiation activities targeted toward each of the BIE member states.

They held a luncheon meeting with interested persons of the BIE member states who stayed in Paris over the two days, September 6 and September 7. While the delegation explained the attractions and charms of Busan as a host city for World Expo 2030, they asked for support. During the luncheon meeting, a local Busan company, Daesun's leading alcohol, "C1 Plum Gold," was used to make a toast.

On September 7, the delegation met the Mongolian and Rwandan Ambassadors to Paris, major negotiation-target states, and stressed the imperativeness of hosting Expo 2030 in Busan.

The delegation emphasized that World Expo 2030 in Busan will be an ideal opportunity to develop sincere mutual relationships and seek solutions to global problems, such as climate change.