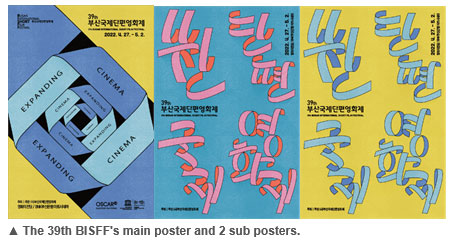 BISFF has released the main and sub official posters for the 39th BISFF, which will take place over 6 days from April 27th to May 2nd, 2022, at Busan Cinema Center and BNK BUSAN BANK Art Cinema in Busan. This year's festival will have the theme 'Expanding Cinema.' To appropriately reflect the theme on the official poster, BISFF organized a poster design competition and chose ‘EXPANDING CINEMA,' by MONK as the winning piece.

The 39th BISFF will pay attention to the expandability of cinema, which is called the seventh art due to its wide spectrum and comprehensive artistic properties. In particular, due to the spread of COVID-19, a lot of things have changed in the film industry including how films are produced, distributed, and screened. “We are in the midst of a crisis, yet this might be an opportunity to take a new stride forward. This year's festival will be a significant platform for independent, autonomous, and experimental short films. The theme of this year's festival is 'Expanding Cinema,' as its goal is to help in the growth of short films,” BISFF officials explained. “This year's festival will see an expansion of short films in terms of format, content, and region.”

BISFF previously revealed its theme for this year's festival and held a poster design competition. Over the course of two weeks, 187 artworks were submitted. The piece chosen as the final winner after fierce competition is 'EXPANDING CINEMA' by MONK, an artist who has worked in a variety of fields ranging from making posters for performances to designing albums. "The key motif for the poster is the festival's representative colors and the expanding strip, which contains the limitless expandability and possibility of a short film," MONK said.

The main poster may appear simple yet striking to viewers due to its lines and planes. The overlapping, interconnecting, and extending surfaces that have no clear distinction between inside and outside, like a Möbius strip, may remind viewers of a camera lens and aperture, symbolizing 'the creator's gaze,' which is fundamental to film. Furthermore, the strip with the phrase 'EXPANDING CINEMA,' which reminds viewers of a film, extends as if burrowing deep inside or expanding out of the frame, symbolizing the depth of artistry and ingenuity in short films.

The sub posters will expand on the theme with two quite distinct versions: one with the film festival's representative colors and one with a dramatic color contrast. It is especially symbolic to see how the artist used the Busan International Short Film Festival lettering as a short strip to represent the characteristics of short films. “I wanted the posters to feel new and fresh while still maintaining the festival's identity,” the artist said. “It is the result of deep consideration and reflection on how the festival should approach the audience and filmmakers in the future.”

Meanwhile, with the release of the official posters, BISFF has officially stated that the 39th BISFF will be held this year. "Short films, which will be the beginning and end of cinema, were once thought to be a practice piece that a filmmaker would make before starting on a feature-length film. At this year’s film festival, short films will be recognized as a form of art capable of representing the world in the most artistic way,” stated the organizers, raising expectations for the upcoming festival.