2019 Busan MARU International Music Festival to Be Held from Aug. 30 to Oct. 1 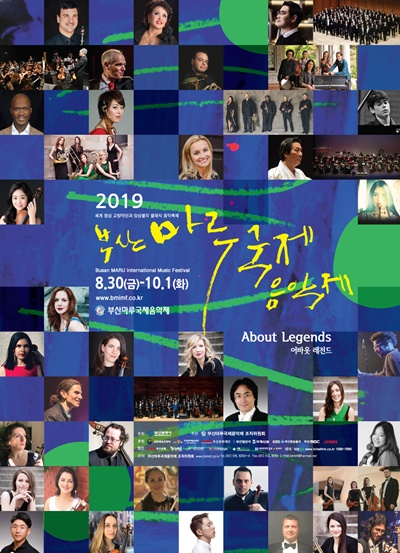 The 2019 Busan Maru International Music Festival (BMIMF) will be held from August 30 to October 1, 2019 at venues all around the city, including the Busan Cultural Center, Eulsukdo Cultural Center and Busan National Gugak Center.

BIMIMF, hosted by Busan Metropolitan City and organized by the BMIMF Organizing Committee, started in 2010 and marks its 10th year as an annual classical music festival with impressive growth that has received wide domestic and global attention.


Under the theme, “About Legends”, BMIMF 2019 will feature a variety of classical music from representative classical music composers, such as Beethoven, Mendelssohn, Mozart and Tchaikovsky, and accompanied by performances and ensembles from the world’s leading symphony orchestras and eminent musicians.

The opening concert by the Tel-Aviv Soloists Ensemble Orchestra is scheduled to be held on August 30 at 7:30 p.m. at the Busan Cultural Center. About 2,000 musicians from 20 countries around the world will attend this year’s classical music festival.

Festival information, including concert schedules, tickets, venues and musicians is available at http://www.bmimf.co.kr.

*‘Maru’ means mountain summit or roof in Korean, so the name of the festival implies that its goal is to become the top symphony festival in the nation, attracting the world’s most talented musicians.