About the Nakdong Estuary

What is a river estuary?

An estuary is the place where a river or brook meets the sea.

The region where the fresh water mixes with the sea water varies by the ebb and flow of the sea and the variance of the brook water, therefore the area cannot be clearly defined geographically. The salt concentration in an estuary, is diluted by the fresh water flowing down from the river, so it is higher than that of fresh water but lower than that of sea water, therefore it's called “brackish water". So an estuary belongs to the brackish water region.

At an estuary, it is possible to to look down on the different types of fish living in the brackish, fresh and salt water respectively. This is the very reason why an estuary has high biological diversity. As it provides various habitats of different salt concentrations, it allows diversified animals & plants to become adapted to those environmental elements. At an estuary, you can come in contact with a variety of nature’s species. Natural embankments are well-formed at both edges of the river, around which there are swamps and marshes, and a lake called a “lagoon” can also be found nearby the land.

Towards the seaside of an estuary a delta is formed, a river mouth and a tidal flat. A delta, where the sand & mud carried over along the river accumulates towards the sea, provides fertile soil rendering the area agriculturally rich. The tidal flat around the estuary offers abundant nutrition so thousands of animals & plants thrive there. Around the estuary tidal flat live salt plants like reeds, thus the scenery is beautiful and it becomes the habitat of migratory birds, providing abundant food.

Terrain by a flowing stream 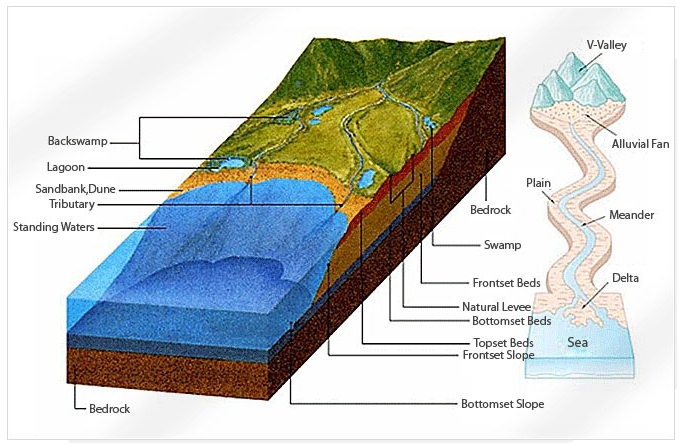 Estuaries in the Republic of Korea 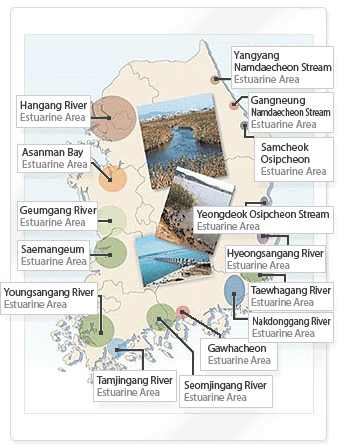 In Korea, there are at least 329 estuaries including 13 nation rivers directly flowing down to the sea, 4 regional 1st grade rivers, and another 312 regional 2nd grade Rivers

Mangyunggang River, Dongjingang River and Yeongsangang River located around the reclaimed land of Saemangeum on the west sea have a lot of bays and islands offshore and widely-formed tidal flats made possible by the tidal range. The rivers of the east sea, compared with those of the west/south sea, are small in size and have little tidal range representing very simple natural estuaries.

Most of the major estuaries in Korea have banks constructed to avoid the damages caused by the salt of the sea water, therefore somewhat losing their natural features as estuaries. The only river without an estuary embankment out of the 4 major rivers (Hangang River, Geumgang River, Yeongsangang River, Nakdonggang River) is the Han River which is situated at the borderland. As for the rest of the rivers, they all have embankments constructed at the estuaries, along the end of the rivers, so “brackish water regions are reduced between the divide of the sea and the rivers. This has caused difficulty with wildlife moving between the rivers and the sea.

Also, the swampy lands around the estuaries have been reclaimed to resolve their lack of utility and used for industrial complexes. 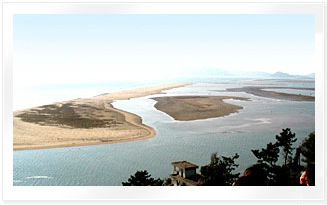 Well-formed small & large sized deltas such as Eulsukdo, ILwoongdo, Daemadeung, Jangjado, Shinjado, Jinwoodo, Baekhapdeung, Doyodeung, etc, and along with these deltas, the tidal flats and the forests of rank reeds around the estuary have made good habitats for migratory birds. The peripheral area of the estuary where the sea water meets the river water and the shallow tidal flats is widely formed, thus it features lots of plankton, fish, shellfish and aquatic insects that propagate and provide migratory birds with abundant sources of food.
The Nakdonggang River Estuary has been well known from olden times as a production and gathering place of diverse marine products such as see weeds, oysters and corbiculas. At present however, the shape and utilization of it has changed and the remains of the past cannot be found at the remaining locations.

Therefore, it is regarded as a unique and special place Busan can be proud of, where you can see a great number of migratory birds visiting throughout the seasons and spreading out across the estuary with their enormous population.