Nampo-dong (neighborhood) is a favorite spot of Busan residents and tourists alike, comprising of Gukje International Market, Bupyeong Kkangtong Market, the Busan Cooperative Fish Market, Chungmu-dong Daybreak Market and Jagalchi Market, which is made up of the entire area stretching across BIFF Plaza.

With so much to see, Dynamic Busan is here to guide your trip to this area of food, culture and history. 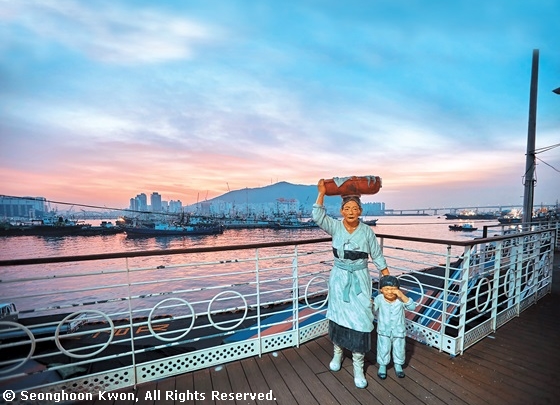 △ A statue of a Jagalchi ajime and her crying son, a tribute to all refugees who fled south to Busan during the Korean war.

Chungmu-dong Daybreak Market was formed in the 1960s and was the go-to location for nearby restaurants and grocery stores that needed supplies of their own. As a result, the market would open at daybreak to accommodate those businesses. To this day, the market opens its doors early.

Don't forget to visit the observatory at the end of your time there. Though small, it is a historical site that gives you a pleasant view of the surrounding area. One particularly poignant site is a statue of a mother and her son, in honor of Korean War refugees who fled to Busan. These refugees climbed hills and mountains in search of a place to settle, and so a village formed along the way.

To live, refugees came down to Busanhang Port and opened shops and stalls. The statue is a reminder of the difficult times families faced all those years ago. The mothers immortalized through the statues were called Jagalchi ajime, or, mothers who sold products in Jagalchi Market. The diligent and strong Jagalchi ajime remains a revered symbol of the city.

The history of Jagalchi Market dates back to the period of Japanese colonial rule. The Jagalchi area became the center of fisheries products for the entire country, and after the Korean War, Jagalchi ajime would sell customers fish from boats. In 2006, the area was refurbished into the Jagalchi Market of today.

In a narrow sense, the market refers to the fishery stores, but in broader terms, Jagalchi Market covers the various shops and stalls around it. At Jagalchi Market and the neighboring Shindonga Seafood Market, you can buy fish on the first floor and eat it in the restaurants on the second floor, for a fee. Due to the large number of foreign visitors, tourists may look at an electronic display board that shows the prices of fish in Korean, Chinese, English and Japanese.

Walking along Jagalchi Market, you will finally arrive at Yurari Plaza, which claims to be the starting and ending point of the Eurasian continent. The plaza is known by many as the place to go to see the opening of the Yeongdodaegyo Bridge. There is a Jagalchi ajime figure there, too. If you go there at dawn, you'll be able to see the morning sun shining brightly on the waters of the port.

<Walking Busan With You>

The city is planning group walking tours of different areas of the city with citizens, reporters and heritage commentators. Participation is free, but you should prepare your own water, snacks and other needs. Those who wish to participate in the program can apply for it through the editorial department of Dynamic Busan by calling 051-888-1291 or emailing arang7@korea.kr. We will contact you if you are selected.