The nation's largest game expo, "G-STAR 2022," will be held at BEXCO from Nov. 17 to 20. The long-awaited festival returns to normal after two years with more participants, game sub-missions, exhibitors, new on-site exhibitions and guests. This year, G-STAR is held concurrently with the Esports Championships East Asia at Brena Esports arena in Busanjin-gu (district) from Nov. 16 to 18. 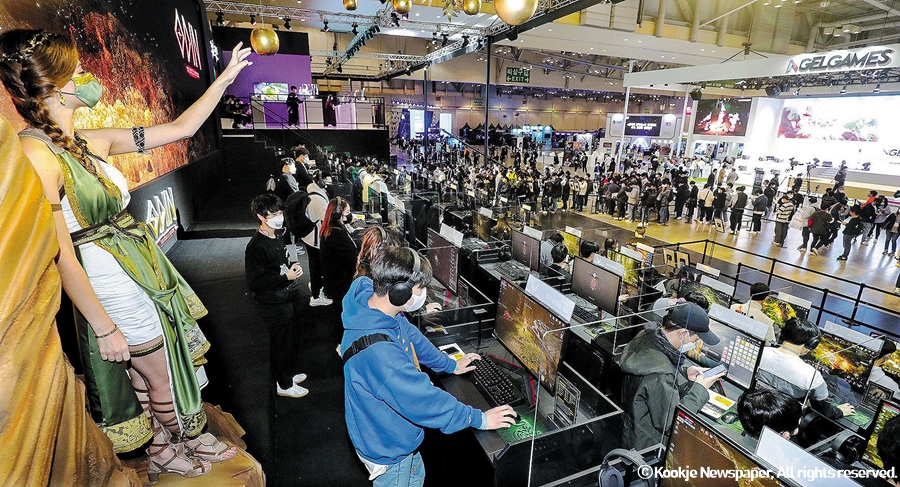 G-STAR offers the chance for gamers to battle live on-site at BEXCO.

One of the main aspects to watch this year is "changing K-game." The direction of the Korean game industry is breaking away from the current decadelong mobile-focused gaming. Netmarble Corporation and Kakao Games are expected to present PC games, as are NEXON Co., Ltd., Krafton Inc. and NEOWIZ Corp, in addition to their console works.

A step out of the usual, NEXON joins the B2C exhibition hall with 300 booths which will include a few focused line-ups. Expected entries include "KartRider: Drift," "The First Descendant," "VEILED EXPERTS" and "Warhaven." Since they have already been well received abroad, anticipation for their G-STAR premiere is growing and announcements for game previews are in the works.

Krafton and NEOWIZ have confirmed the release of one each. Krafton will release "The Callisto Protocol," a horror shooting game produced by Striking Distance Studios, an independent studio. The Callisto Protocol, new from Glen Schofield, famous for "Dead Space," is a multiplatform-based game set to be released globally Dec. 2. NEOWIZ will release the RPG, "Lies of P," which rose to fame at GAMESCOM, a German game exhibition, where it received positive feedback, which is rare for a Korean game.

In addition, the team-based strategic third person shooting game "Overprime" of Netmarble and the survival shooting game "Dysterra" of Kakao Games are expected to add interest in PC games. A lineup of mobile games will be included. Netmarble and Kakao Games are expected to release new mobile games. Set up within the B2C hall are 200 booths organized by WEMADE to display "Night Crow (working title)" by MADNGINE and "Legend of YMIR" by WEMADEXR.

Each year game fans from all over the world flock to G-STAR, especially this year, as the restrictions on admission have disappeared. The organizers have planned to set up additional exhibition areas on the third floor of BEXCO Exhibition Hall 2 and use the BEXCO plaza more actively. Companies such as NEOWIZ, HoYoverse, Level Infinite, Flint and ZLONGAME will greet visitors. For additional information, refer to the G-STAR website (gstar.or.kr).