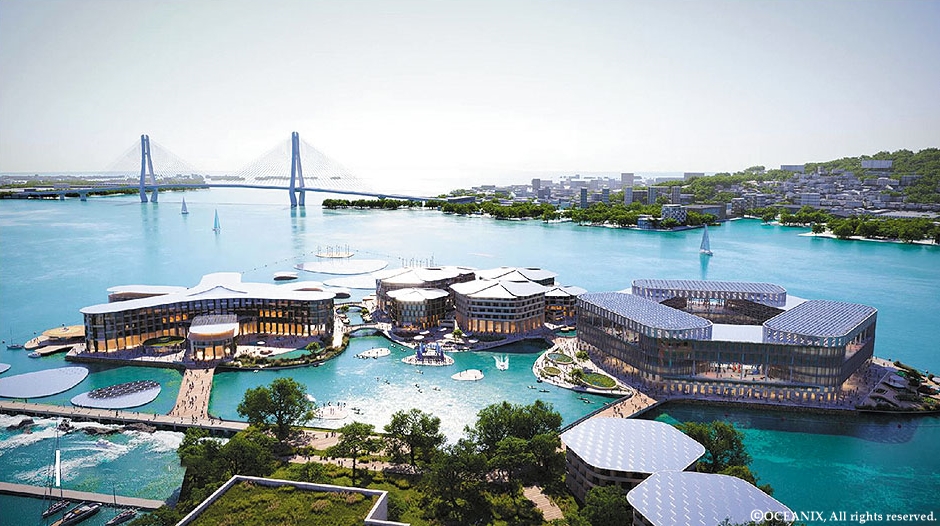 Projected layout of the floating city within Busan North Port.

City Hall, the United Nations Habitat (U.N.-HABITAT) and American Company "OCEANIX" unveiled the prototype of the world's first floating city, to be located off the coast of Busan. On April 26, the "sustainable floating city" initiative was announced at the U.N. Headquarters in New York. U.N.-Habitat proposes similar projects around other coastal cities due to their vulnerability to rising sea levels caused by climate change.

The model presented posits the use of sea-floating structures rather than the use of coastland so as not to destroy the local marine ecosystem. The proposal aims to develop an eco-friendly self-sufficient city that utilizes six integrated systems: a zero-waste circulation system, a closed water system, a food production system, carbon-neutral energy resou-rces, innovative mobility technology and coastal habitat regeneration. The proposed city consists of three platforms stretching 6.3 hectares. The design incorporates living, research and lodging areas and will utilize bridges to connect to the mainland.

Eco-friendly innovative technolo-gies, including energy and water circulation systems, used for the con-struction, will be established within the city. Additionally, each platform will be easily accessible from one another. The overall goal of the metropolis is to create a self-sustainable city. Last November, Busan signed an MOU confirming the project with U.N.-Habitat and OCEANIX. The tentative timeline shows that planning will conclude by 2026 and construction will begin in 2027, with completion by 2030.