Late last year, the second section of the Bus Rapid Transit (BRT) op-ened 6.6 kilometers from Naeseong Intersection in Dongnae out to Gwangmugyo Bridge in Seomyeon. With the additional section, the BRT operates for a total of 17 kilometers, including the first section between Unchon's three-way intersection, Haeundae and Allak Intersection, which opened in 2017. 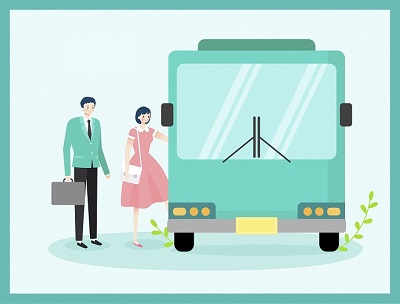 △ The new bus lane is expected to be popular with both city residents and tourists.

The BRT is a transportation system that implements bus-only lanes on major roads. They are necessities, due to the uncertainty that public buses face with traffic, a stark contrast to the precision of arrival times displayed by the subway.

The new lane is expected to be popular with both city residents and tourists. Dongnae, Seomyeon and Haeundae are busy with both demographics, so those who use public buses should be able to arrive at their destinations quicker than before. In fact, City Hall predicts that the new lanes will increase bus speed by up to 18 percent and improve arrival times by 30 percent.

To use a bus that runs on the BRT, you must cross the street to a bus stop set up in the middle of the road.