As part of the government's tourism development strategy, the Ministry of Culture, Sports and Tourism has designated Busan as an international tourist destination. Busan was given its status due to its geography and culture, its strong infrastructure in transportation and its tourism industry, which is already established. 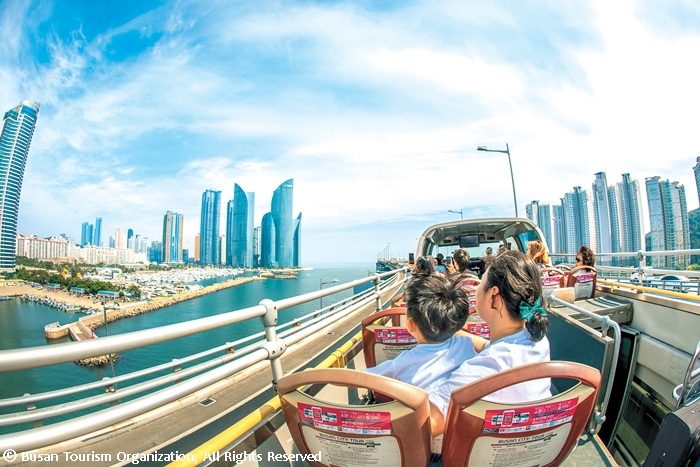 △ Busan will experience many changes, including improvements to its city tour buses to make them more enjoyable and convenient for foreign tourists.

With its selection, Busan plans to attract 10 million tourists annually. The city is receiving 50 billion won from the central government to go with 100 billion won that City Hall is investing. In total, Busan will invest 150 billion won into 57 different tourism projects aimed at improving city tour buses, developing walking courses, providing more facilities, activities and events for marine leisure and expanding the use of foreign languages around the city.

City Hall will divide Busan tourism under three designations. The first one, Dynamic Busan, will focus on tourism largely based on the city's nature. Busan's marine leisure and seven beaches will be primary focuses of this first theme. The second section is Unique Busan, which will bring tourists to the city's historical sites, such as the UN Peace Memorial Park, Gamcheon Culture Village and other sanbokdoros (mountainside villages). The final third, named Fantastic Busan, will highlight the city's year-round festivals and conventions, with the Busan International Film Festival and the Busan One Asia Festival as two of its crown jewels. Other goals include connecting the city's walking courses and creating souvenirs and products specific to Busan.

City Hall also has its eyes set on expanding Busan's business, transportation and tourism infrastructures. The Meetings, Incentives, Conferences, Exhibitions (MICE) program is a major priority. To accomodate those in town for business or pleasure, Busan will launch a tourism pass for convenient package transportation. Further developments will include multilingual signs and posts at 200 major tourist sites. Additionally, the tourism quality certification system will guide visitors towards accommodation and shopping destinations. The city tour bus will work towards being more convenient through real-time information and interpretation systems.