The World Table Tennis Cham-pionships, one of the world's largest sporting events, is being held in Busan for the first time.

The 2020 World Table Tennis Championship will be held at BEXCO in Busan for eight days from March 22 to 29. About 50,000 spectators, including 2,000 visitors from 130 countries, are expected to gather in order to participate and see the world's top table tennis players in action. 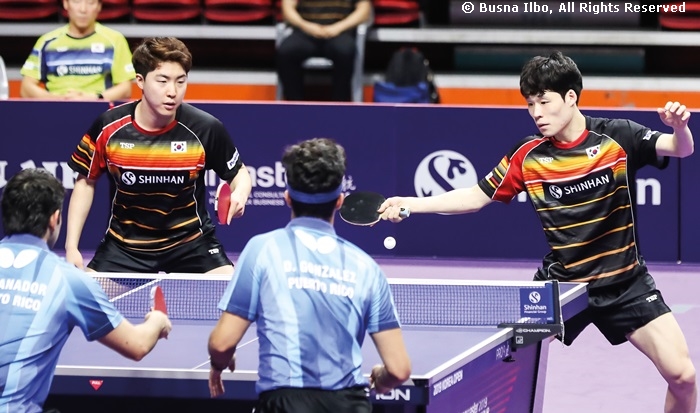 △ Players in action during the Seamaster 2019 ITTF World Tour at Sajik Stadium in July, 2019.

Korean table tennis has three Olympic gold medals, which were won in the 1988 and 2004 events. Despite being a table tennis power, Korea has no experience hosting the championships, though its neighbors do. China has held the championship five times, and Japan has hosted it on seven occasions.

For Busan, this is an especially  meaningful event, as some of the top names from the game's history, like Yoo Namkyu, Hyun Junghwa and Ahn Jaehyung, are all city locals. This is also a chance for spectators to see their country in action before the upcoming Olympiad in Tokyo in the summer.

Ticket sales for the World Table Tennis Championships have already begun. A total of 50,000 tickets will be issued for the tournament, with an average price of 30,000 won per game. Seats for every stage of competition will be grouped in three classes, from S to B. These classes will vary in price: B seats during the qualification rounds sell for 10,000 won, but S seat finals games cost 60,000 won.

During these finals, which are scheduled for March 26 through 28, matches will be divided into day and night slots. A day ticket will get visitors into games during the morning and afternoon. Night sessions are intended for those who have to work during the day.

In order to increase public participation, the organizing body is providing ticket discounts. Fans who purchase tickets in advance will receive the following discounts: 15 percent off in January, 10 percent off in February and 5 percent off in March, prior to the championships' commencement.

Tickets can be purchased through Hana Ticket (ticket.hanatour.com) and the website of the organizing committee (wttc2020busan.com). For purchase inquires, call 1566-6668.