Many of Busan's museums, music halls and centers of culture and art plan to carry out normal operations and special events during the four-day holiday period of Seollal (Korean lunar New Year).

The day lands on Jan. 25 in 2020, two weeks earlier than in 2019, but the official Seollal holiday stretches four days, from Jan. 24 to 27. Busan Museum and Jeonggwan Museum, well known for their exhibitions and Korean traditional theatre, will give citizens and residents New Year's activities. Busan Museum will provide visitors with outdoor folk games, such as tuho (pitch-pot), gulleongsoe (hoop rolling), jegichagi (similar to Western hackysack), and paengichigi (top spinning), on Jan. 25.

Additionally, the lobby of Busan Museum has begun an exhibition entitled "Five Hundred Arhats of Changyeongsa Temple Site: Reflection of Our Hearts," which is running until Feb. 2. The lobby is filled with 50 statues of arhats, who were the followers of Buddha. The space is made to look like nature, where arhats meditated and practiced Buddha's teachings, and provides a space for visitors to do so, as well. There will also be traditional performances in the lobby on Jan. 25. Gijang-gun's (county) Jeonggwan Museum, which reproduces life from Korea's historical three kingdoms (Goguryeo, Baekje and Silla) will additionally provide a folk game program on its first floor between 10 a.m. and 5 p.m. during the entire four-day period.

The Busan National Science Museum will provide visitors with a 50-percent discount of its usual admission fee of 3,000 won. In addition, the venue's outdoor plaza will operate a program for visitors to play traditional folk games with a more scientific approach. The museum's special exhibition, "The Challenge to Space," is also being held, in commemoration of the 50th anniversary of the Apollo 11 moon landing. The exhibition serves visitors with unique experiences related to space exploration technology, such as satellites, space stations and laboratories. Using virtual reality, visitors can walk on the surface of the moon, control unmanned probes and experience weightlessness. The exhibition will run until March 31. Tickets are 5,000 won for adults and cost 6,000 won if purchased in a package with the permanent exhibition hall. The museum is closed on Jan. 25 and 28. 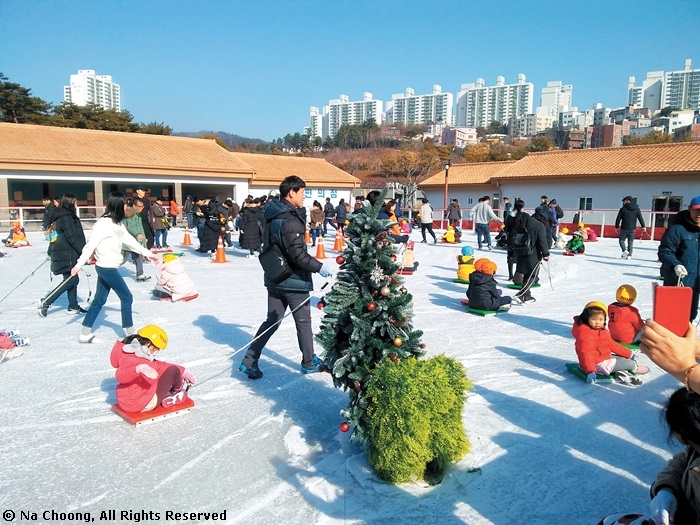 There are additional events ongoing at Busan Citizen's Park. Dasom Plaza is operating outdoor sledges and ice tubes for children for free until Feb. 9. The park's pond is the center of the location's light festival that will run until Jan. 31. This festival brings the park colorful illuminations, an 80-meter-long light tunnel, twinkling walkways and more for some great photo opportunities.