The venue for the World Expo in 2030 will be selected at the Bureau International des Expositions (BIE) General Assembly in November 2023. As the city continues to prepare, the BIE on-site inspection delegation is scheduled to visit Busan from April 3 to 7. 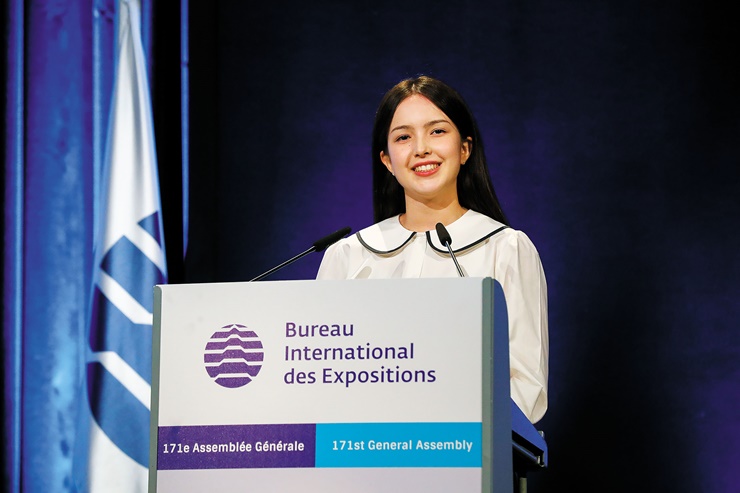 ▲ Local teenager Campbell Asia presents at the BIE in Paris.

■ One step closer to success
A highlight of the third presentation last year was a speech by a fifteen-year-old middle school student from Busan. The speech was said to attract the attention of international delegates. The presentation had an outpouring of positive responses. The hall was full of spectators who smiled, applauded and took videos of Asia's speech. One ambassador stated that the speech inspired him to visit Busan.
Campbell Asia, who will graduate from middle school this year, said the honor of speaking was the biggest graduation gift. She also described how the day she arrived fell on her birthday and how she has wanted to visit France since she was young. She emphasized how meaningful the honor was and how happy she was to represent Korea. It's important to note that the speech was secret and functioned as Korea's ace in the hole. To make the trip, Asia submitted a formal letter to her teacher because she had to miss classes for a week. However, she didn't discuss the speech with others until after the presentation.

■ Cheering for Busan in Paris
During the presentation, she discussed the World Expo 2030 Busan and how it can become a platform to solve humanity's problems. In particular, she stated her confidence in Busan as a "global platform." The third presentation was significant because delegates, including ambassadors from many of the BIE member states, attended in person for the first time. Due to the pandemic, the previous presentations were held online with a limited number of attendees.

■ Cultivating a sense of peace at the United Nations Memorial Cemetery in Korea
Campbell Asia is the United Nations Memorial Cemetery in Korea's (UNMCK) Youth Ambassador, oversees the UN Youth Environmental Conference delegates and hosts a children's television program. She is beloved by foreign veterans who participated in the Korean War and is often referred to as the "granddaughter of veterans" and "little diplomat."
As a third-grade student, she won first prize for two consecutive years in a speech contest created for thanking veterans. Then, in 2017 she visited the U.K., Netherlands and Belgium, appearing on television and gaining fame as "the girl knowledgeable about the Korean War."
Speaking about her past, Campbell Asia described her history as a representative. She said, "last October, I gave a speech at the United Nations Memorial Cemetery in Korea, where two soldiers recognized me." The air force also gave her a custom-made uniform after they realized the one she wore was too small.

■ New Year's wish
This year, the same year of the World Expo venue confirmation, marks the 70th anniversary of the Korean Armistice Agreement of July 27, 1953. In earnest, countless plans and efforts are in place to secure a successful candidature bid for Busan this year. In discussing the coming year and the city's goals with Campbell Asia, she expressed her hope to meet more Korean War veterans. In particular, Asia described how she could not meet them due to the pandemic but hopes to visit with them soon "to talk and listen to their stories."