A ballet of William Shakespeare's most famous comedy, "A Midsummer Night's Dream," is being staged at the Busan Cultural Center on July 25 and 26. 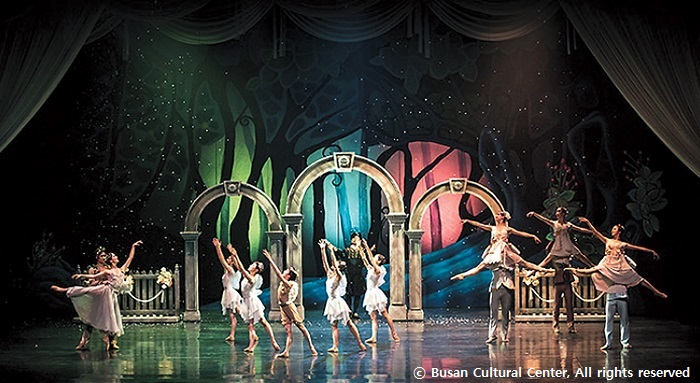 △ A still from "A Midsummer Night's Dream."

The production, performed by the Seoul Ballet Theater, was selected by the Korean Cultural and Arts Centers Association in 2016, 2017 and 2019 as a performance program of excellence, due to its costumes, dancing and set design. Music by Felix Mendelssohn, Pyotr Ilyich Tchaikovsky and Wolfgang Amadeus Mozart will be used in the ballet, which will be accessible to both adults and children. The plays of Shakespeare, including "A Midsummer Night's Dream," were written in early modern English, which can be difficult for people in this day and age to understand. So, the ballet aims to make the work more easily understood by general audiences through the use of music, dance and costume.

The story of "A Midsummer Night's Dream" features five subplots that lie underneath a wedding between the characters Theseus and Hippolyta. There is a conflict between four Athenian lovers, a fairy who mistakenly doses them with love potion and a group of actors preparing for a show, one member of which is accidentally turned into a donkey.

How to get there: Daeyeon Station (metro line 2), exit 3. Go straight for 10 minutes.