Celebrating the Year of the Tiger, Busan Museum runs the new collection exhibition "Joseon Tiger crossed the Sea" at "Busan Space" on the second floor until June 12. The three featured pieces were made to be exported to Japan during the late Joseon Dynasty. 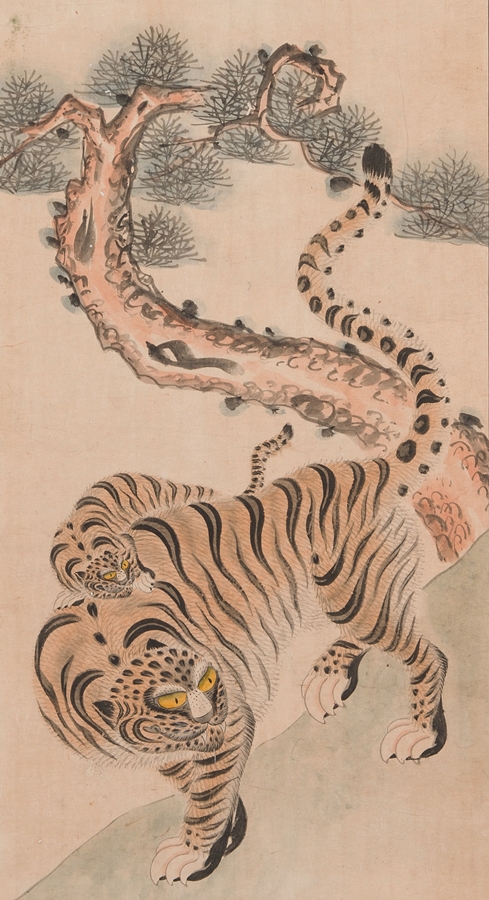 △A tiger cub riding on its mother's back.

During this period, countless tigers roamed free, dubbing the region the "Country of tigers." Traditionally, wild tigers are revered as sacred animals that represent both bravery and fear. People believed they ward off evil spirits, making it an attractive theme for paintings, clothing, ornaments and other artifacts. These pain-tings present specific themes depending on the environment. When pine trees are added, they represent longevity. Simi-larly, bamboo is added to portray prosperity within a ho-usehold.

Paintings of tigers with the Joseon stamp were unearthed after the 18th century. Throu-gh these discoveries, it's now known that these "Joseon Tiger" paintings crossed the sea and traveled the world. Even in Japan, where there were no wild tigers, they were still considered sacred. There, many believed the Joseon pai-ntings were holier and therefore preferred.

As demand for the works grew, a specific locale in Busan was founded and put in charge of producing these paintings. This exhibition gives guests a firsthand look at three of these pieces. One piece is by artist Kim Jun-geun, who specialized in daily traditional Korean life works and sold them to expatriates and tourists in port areas like Busan and Wonsan during the late 19th century.

One of the paintings is the figure of a tiger coming out of the mountain with its tail raised against a background of tall bamboo drawn using ink. Another features a mother tiger as she protects her cub. Other paintings that were previously traded with Japan are also on display.