As the season heats up, it's time to cool down. Let's dive into some diverse but favored Japanese dishes this June. 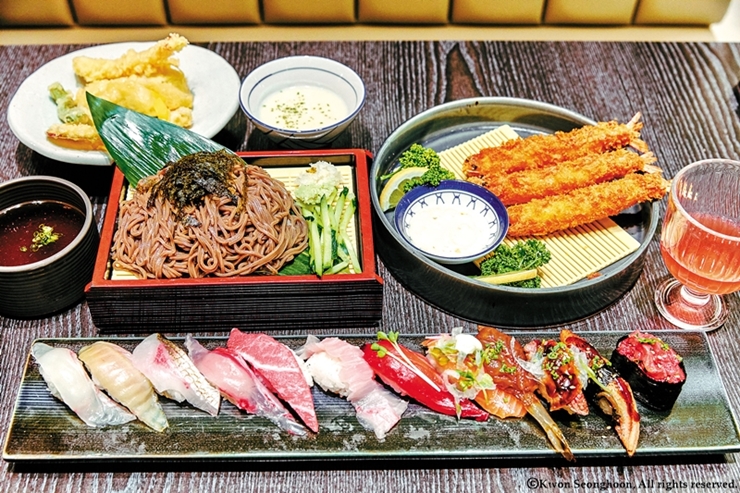 There are two sister cities in Japan. One is Shimonoseki a transportation hub in Western Japan. It is known for its developed fishery industry. The cities signed an agreement in 1976, making it the third-oldest sister city at 46 years so far. Since 1992, the two cities have sent governmental officials biennially to strengthen and continue relations. The other, Fukuoka, is also a western city with less than an hour plane ride and an approximate three-hour ship ride from Busan. The cities have sent officials every two years since 1990 and signed an official sisterhood agreement in 2007. Exchanges encompass many subjects, including administration, culture, sports and economy. The cities also participate in the Asian-Pacific City Summit and host tourism exhibitions.

Among Japanese food culture, kaiseki is often encountered in Korea when guests are invited to events. Kaiseki is a Japanese banquet multicourse meal in which various foods are served on small trays, one right after another. It is composed of seven dishes, an appetizer, soup, sunomono (pickled vinegar), sashimi (sliced raw fish), grilled fish, a braised dish and a steamed dish in the summer or a fried dish in the winter.

Appetizers and soup have different ingredients depending on the season. Sunomono is a refreshing salad-like dish made by mixing ingredients with sugar, vinegar and soy sauce. The grilled fish varies based on the flavors used, such as teriyaki (soy sauce) and misoyaki (miso-marinated). The braised dish usually consists of meat, seafood and vegetables, which are boiled down into a broth with kelp or dried fish flakes.

Traditionally, Japanese people eat rice by holding the dish in one hand and using their chopsticks with the other hand. The chopsticks are ideally placed on a specified rest when not in use. Soup bowls are held with both hands and drank from the edge. Ginger is often served with meals and is used as a palate cleanser.

Noodles, fish, meat and rice are Japanese staples. Various dishes highlight a particular ingredient. One of the most popular dishes in Japan is soba. Soba is thin brown noodles made from buckwheat and eggs. It is usually eaten hot or as part of a cold soy sauce-based soup. Udon, made from flour, is white. The noodles are slightly thicker than soba and they are also served in a cool mild soy-sauce based soup. Additionally, they can be added to hot soup with scallions and chili pepper powder.

Sushi is another beloved Japanese dish that uses fish and vegetables seasoned with vinegar, salt and cooking wine. It is served in various shapes and sizes. The fish used is raw or boiled and served on or in rice. It is usually eaten after dipping the fish side in soy sauce.

Sukiyaki is a meat and vegetable dish that is boiled on the grill after marinating. It consists of thin slices of meat, tofu, konjac jelly and vegetables that simmer in a mixture of soy sauce, rice wine and sugar. It is sometimes served with a raw egg as a dipping sauce to cool it down.

Tendon is a tempura rice bowl. The deep-fried items are set atop a bed of rice which is typically covered in soy sauce.

This is an eatery famous for soba and udon. The noodles are handmade by the locale's Japanese chefs. Fried toppings for the meal.

Famous for its flavorful ramen and mandu (dumplings), this restaurant has developed a growingly popular ramen dish called "maje soba."

How to get there: Jeonpo Station (metro line 2), exit 5. Walk for about 3 minutes.

This spot oozes a Japanese atmos-phere, in decor and flavor. It's an izakaya, a bar or "stay-drink-place."

How to get there: Kyungsung Univ.·Pukyong Nat'l Univ. Station (metro line 2), exit 5. Walk for about 7 minutes.