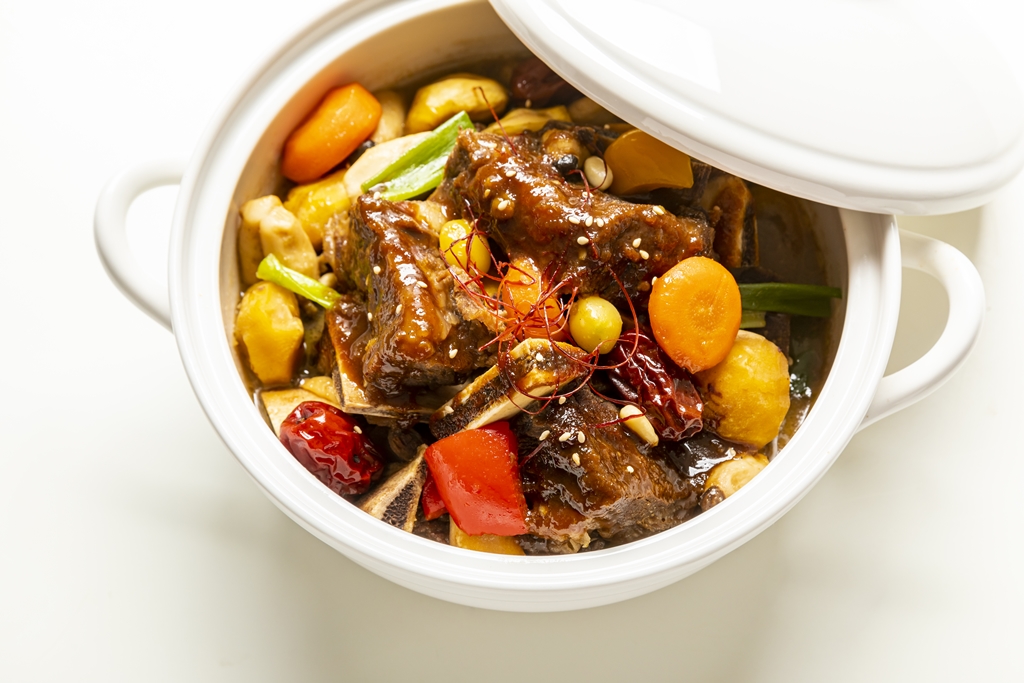 The cool autumn breeze means Chuseok is right around the corner. Considered one of the two main holidays, next to Seollal, Chuseok means "autumn eve." The three-day festival celebrates the full moon and plentiful harvest. To fully prepare for this feast of a holiday we've decided to introduce the most popular dishes.

A table full of different traditional foods and drinks, is prepared during the holiday and used for an ancesteral rite called "Jesa." It is a way of honoring the family's ancestors and the harvest at the same time. Usually, freshly harvested grains, seasonal fruits and other traditional dishes are presented on separate plates atop a large table. Although it differs from region to region and from house to house, songpyeon (half-moon-shaped rice cakes), galbijjim (braised short ribs) and jeon (Korean pancake) make frequent appearances on Chuseok dinner tables.

▲ A delectable traditional treat, songpyeon is perfect to begin or end a Chuseok feast.

The rice cake, a sought-after snack, dessert and even delicacy in Korea, comes in many shapes and sizes, including tteokbokki (spicy stir-fried rice cakes), jeolpyeon (patterned rice cake) and baekseolgi (snow-white rice cake). But, during Chuseok, songpyeon takes center stage.

Songpyeon is a sweet treat made by kneading non-glutinous rice flour with boiling water, adding filling and closing the circular slice of dough to form a half-moon shape. It is usually served warm on a bed of pine needles, which are said to clean the air of toxins. Freshly harvested rice is traditionally used and filled with various ingredients such as beans, sesame seeds and red bean paste. The round dough, reminiscent of the moon, symbolizes abundance and future fulfillment.

Traditionally families gather and make songpyeon on the eve of Chuseok. Making these filled rice cakes is a sort of sport, as there is an anecdote in Korea that if you make the songpyeon symmetrical and beautifully shaped, you will have a beautiful baby.

These days, songpyeon can be bought year-round at most rice cake specialty stores or large marts. Since it's easy to make, many families choose to try and make it at home during the long holiday.

Many people think that holidays need meat. Simple grilled dishes such as samgyeopsal (pork belly) and bulgogi (soy-marinated meat) are common, but galbijjim is the main meat dish on holidays.

Galbijjim is made by cutting beef ribs or pork ribs into pieces, marinating them in soy sauce and various seasonings. Then, they are served with side dishes or garnishes such as ginkgo biloba. Rich in protein, some say it helps build muscle and increase stamina.

Freshly harvested grains, vegetables and fruit are typically found covering the jesa table, so a bowl of meaty galbijjim is a welcomed reprieve. It isn't easy to find a restaurant specializing in galbijjim since it's usually considered a side dish. However, during holidays, like Chuseok, this popular menu item can't be missed.

▲ Jeon can be made with all kinds of ingredients, there are too many types to count.

Jeon is a dish made with various chopped ingredients coated with flour and eggs and then cooked on a pan. Common elements include minced or chopped beef, tofu, kimchi and green onions.

It is mainly eaten and displayed during holidays, festivals, ancestral rites and banquets because it is complicated to prepare. However, due to its growing popularity and availability, you can have jeon anytime.

Several restaurants specialize in jeon and other holiday foods, but countless kits and frozen options are available online and at grocery stores, for those who would rather cook or eat these treats at home.