Mulhoe helps take the edge off of Busan's summer

August is the hottest month of the year, and while the sea and air conditioning can help you cool down, there are some great foods that can do the same thing. One such culinary treat is sweet and spicy mulhoe. 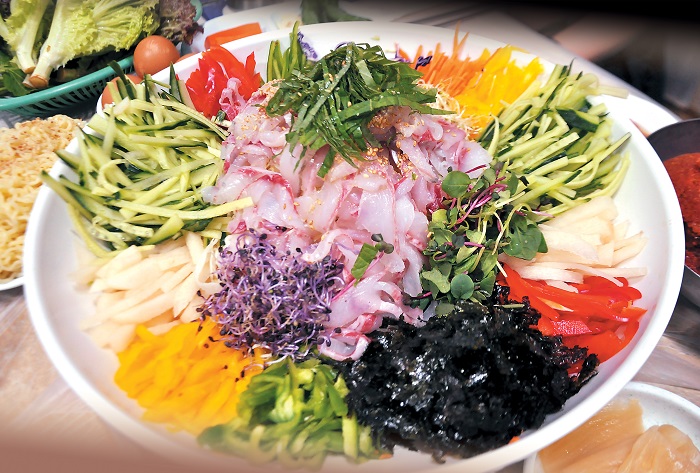 △ Mulhoe is a cold soup made with hoe, or raw fish, and is one of South Korea's most sought-after and iconic dishes.

For foreign visitors, hoe (raw fish) is an unfamiliar taste, but it's the prime ingredient for one of Korea's best summer dishes: mulhoe (cold soup made with raw fish). Seafood of all kinds is chopped, put into a tangy broth and seasoned with pears, onions, cucumbers and a variety of other fruits and vegetables.

Since seafood is readily available to active sailors, mulhoe has been a traditional favorite of theirs for generations and is particularly popular after a night of heavy drinking because of its broth's effect on hangovers. Mulhoe is highly nutritious, being low in fat, rich with vegetables and loaded with seafood, which in turn is packed with protein, vitamins, minerals and DHA, which prevents high blood pressure and other diseases. Here are some of the best places to grab a bowl of delicious, refreshing and healthy mulhoe!

Headquartered at Songjeong Beach, Myungpum Mulhoe is one of Busan's most popular restaurants, with branches in Yeonsan, Gwangan, Dongnae and Songdo Beach. As a result, it's a perfect starting point for what the dish should be.

The broth uses 25 ingredients to obtain its flavor and is the result of 17 years of experimentation and perfection. Pears and cucumbers for garnish are delivered directly from where they are harvested. Put everything together, and you have some of the most delicious mulhoe in the whole city.

Rockfish is the favorite choice of sea creature at Myungpum Mulhoe, but you can also take advantage of a special menu that uses abalone, sea cucumber and spoon worm. Any fish at the restaurant is up for grabs with amazing broth and vegetables. Enjoy your meal with plates of seaweed soup, vegetables and other side dishes.

The rockfish mulhoe costs 25,000 won per person, while the special mulhoe runs 60,000 won for three diners.

Specializing in soups made with spipe fish and stingray, Pohang Hoe-ghwan is unique in its preparation of soup. Mulhoe is usually served together with vegetables, broth and ice, but here, customers are served the dish without the broth, so they mix all the fish, garnish and sauce together first. Eat the hoe with pear, cucumber, seaweed and chopped sca-llions with the sauce or wrapped in lettuce. Mix rice into the sauce and enjoy an explosion of taste!