Four bridges that illuminate the sea

Well-constructed pieces of architecture can become landmarks all by themselves. Among them, bridges have risen to fame as lodestars of architectural beauty. The Golden Gate Bridge in San Francisco and the Tower Bridge in London, are such marvels. However, Busan has many beautiful bridges that can compare, such as the Gwangan Bridge, the Busan Harbor Bridge and Namhangdaeygo Bridge. The City Tour Bus Night view course is known for its impressive views of these structures and other wonders of the city. 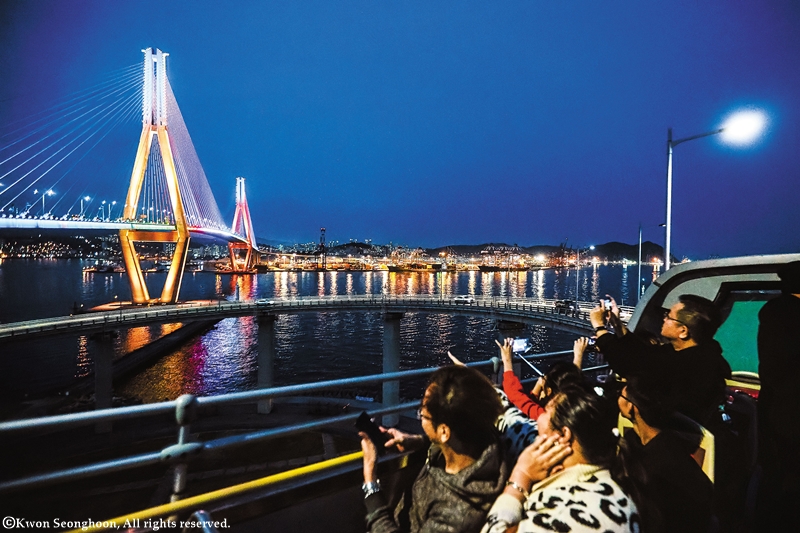 △At the top of the tour bus lies views beyond compare; make sure to get some shots because the sky is the limit.

Busan Metropolitan City presents four marine bridges to travelers through the Busan City Tour Bus Night view tour (Bridge tour) run by the Busan Tourism Organization. Unlike other city tours, it is only available from Busan Station. Along the way, passengers can get off and re-board at Gwangalli Beach and Songdo Cloud Trails to capture a snapshot of the night view. The bus departs at 7:30 p.m. in front of Busan Station every Friday and Saturday. Tickets can be reserved over the phone and can be paid upon boarding via cash or card. The double-decker bus gifts passengers the opportunity to enjoy both the salty spring breeze and a panoramic view of various city landscapes. 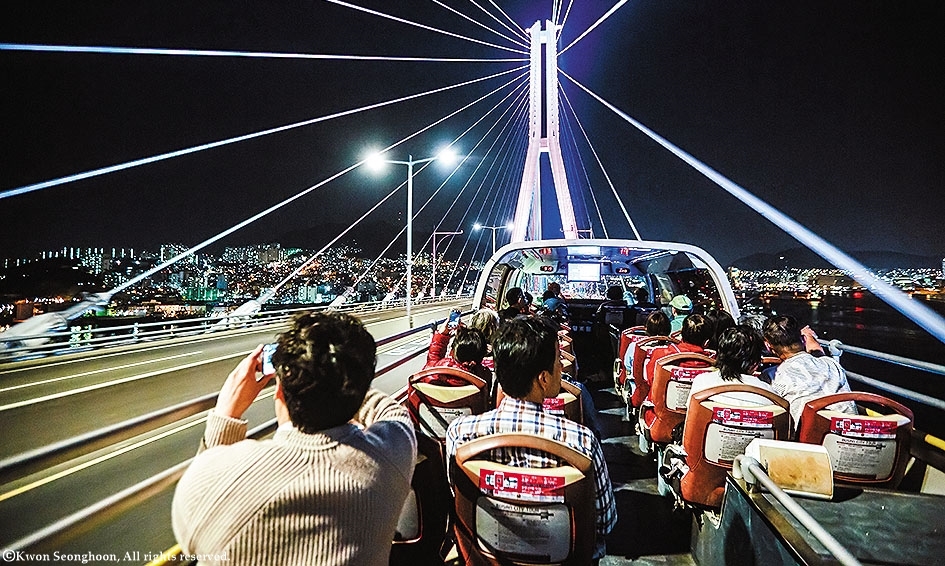 △Busan Harbor Bridge is picturesque in either direction.

The first bridge is Busan Bridge which links Yeongdo Island and Nampo-dong (neighborhood). The area encompassing Nampo-dong, Bosu-dong and Lotte Department Store is part of Busan's old "downtown" that once hosted Busan city hall during the 1990s. This first leg of the course can be viewed as a sort of warmup before fully enjoying the night view of Busan. After about 10 minutes, the bus disembarks from the Busan Bridge at the Yeongdo area and enters an overpass with a beach view. Then, Busan Harbor Bridge links Yeongdo and Gamman-dong in Nam-gu (district). This is where the full-scale night view tour begins.

Busan Harbor Bridge is the longest steel cable-stayed girder bridge in Korea. The tower and bridge are connected using steel cables and concrete, a construction method that cuts back on wasteful spending. Traversing the spiral ramp will lead you to a commanding view of both sides of the cable bridge, where the A-shaped tower awaits.

Then Gamman Dock, located on the right, is flooded with cranes and stacked containers, highlighting Busan as the "logistics city." On the other side, Busan harbor and a cityscape view can be found, reinforcing the city as a harbor hub. Since state-of-the-art LED lights line the bridge, it boasts unique night views. The lighting is reflected on the cables creating the illusion that the bridge is glowing.

The next course runs through the Gwangan Bridge area and represents Busan's nightlife with a night view. The city tour bus passes Busan Harbor Bridge, Gamman Dock and Nam-gu downtown, then stops at Gwangalli Beach for 10 minutes. Passengers can take pictures at the Beach with the landmark bridge in the background.

The bridge's uniqueness not only lies in its structure or positioning but in its technological features. LED lights attached to the bridge can produce more than 100,000 assorted colors and various shapes depending on the day, time and season.

After taking a commemorative photo of the bridge, it's time to ride on it, the highlight of the tour. The bridge deck is featured in numerous car commercials because of the spectacular view.

The bus passes over Suyeong Bridge No.2 and through BEXCO and Centum City to cross the overpass. While riding the bus, passengers can catch glimpses of Marine City skyscrapers and the Yachting Center on the left. After the curved course, the white lights of the H-shaped towers light up the water. Also, the contrast between the bright lights of Gwangalli Beach and the dark ocean waves adds to the overall brilliance of the area. 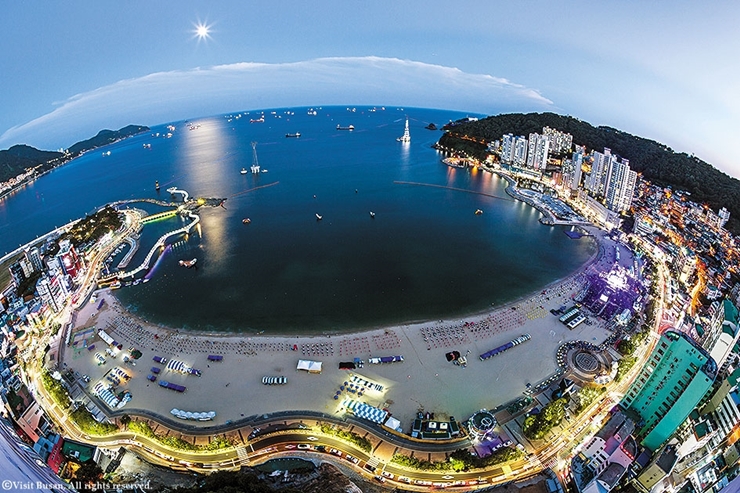 △Outside the heart of the city sits Songdo Beach, one of Busan's seven beaches.

After crossing Gwangan Bridge, the bus goes back toward Yeongdo across Busan Harbor Bridge. The next destination is the Songdo Beach area, where the night view of Namhangdaegyo Bridge awaits.

Namhangdaegyo Bridge is 1,925 meters long, 25.6 meters wide and boasts six lanes. It crosses the sea between Amnam-dong in Seo-gu and Yeongseon-dong in Yeongdo-gu. From the entrance to the exit, 663 floodlights line the way at three to five meters, creating a unique atmosphere. Even though it may not be as flashy as Gwangan Bridge or Busan Harbor Bridge, Namhangdaegyo Bridge features a calm and peaceful landscape. Cool teal lights radiate in the summer, while warm, mellow lights fill the beach during the winter. Also, the 360-meter ship route under the bridge embroiders the area for 10 minutes every hour on Saturdays and national holidays.

The bridge is linked to Songdo Beach, Korea's first official beach. The bus stops in front of Songdo Cloud Trail, where passengers can capture dynamic shots. The area is alight deep into the night and also hosts the Busan Air Cruise, which runs till 8 p.m. on weekdays and 9 p.m. on weekends. After snapping all the beach sights, it's time to head back. Around 9:30 p.m., the tour passes by the Gukje and Jagalchi Markets to return to Busan Station.

The night view tour is recommended for those who want to experience various aspects of Busan in a whole new light. It's the best way to fully enjoy the dynamic charm of the city while soaking in the calm ocean view. 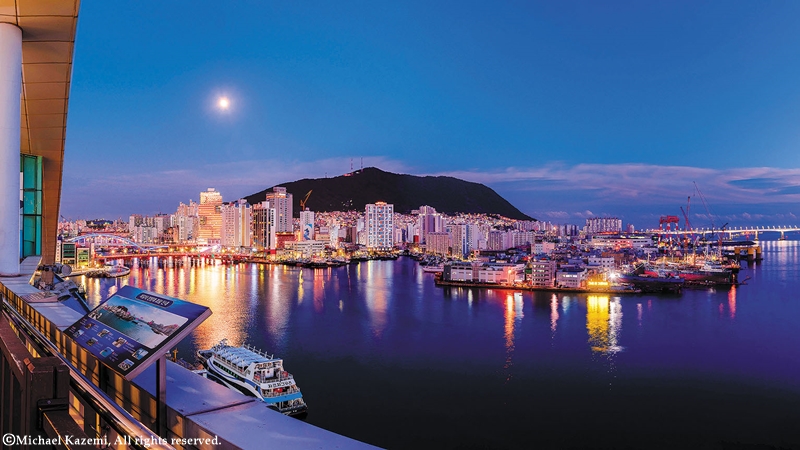 △Yeongdo Island is impossible to miss from the Jagalchi Market Observatory.
LIST