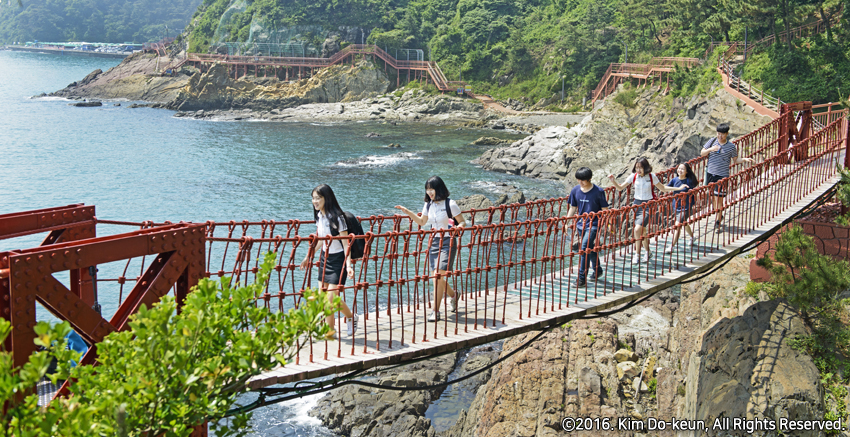 Students on a picnic try out the suspension bridge on Songdo Coastal Bollegil Trail.​

The temperatures are getting higher and the clothes are getting lighter in the city. Donning summer shorts and light hiking gear, groups of adventurers are headed outdoors for fresh air beneath the rays at every opportunity. Naturally for Busanites, this means migrating toward the sea.

Busan has many special hiking courses with beautiful ocean views. Take a trip to the relatively unknown coastal walkways in Yeongdo and Songdo, or stick to the  much-loved moonlit lanes of Dalmaji's Moontan Road. Each option offers a refreshing getaway from the city without leaving its limits.

Soak in the Dalmaji moonbeams 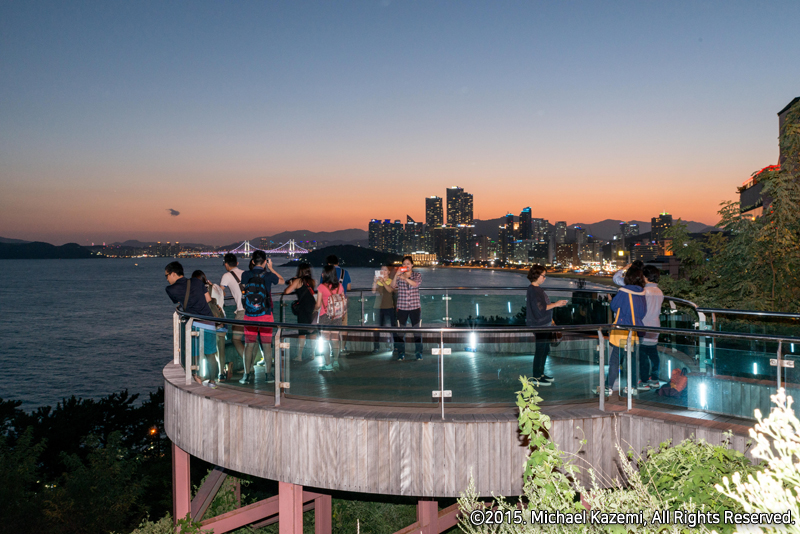 Walk along black pine-lined pathways and take in the view of Haeundae while waves crash in the distance. Honor the meaning of the word "Dalmaji," moon-viewing, with a moonlit walk.

The trail earned its name "Moontan Road" for all the visitors basking in the moonlight, building their "moon tans." The area lives up to its name, known as an ideal location for admiring an especially big and bright moon. It's a great walk during the day, and an unparalleled romantic location after dark. Each section of the road is named with pure Korean words that incorporate the word dalbit (moonlight).

Moontan Road starts at the Mipo railway. Walk up Dalmaji-gil (road) about 1.2 kilometers from the Mipo five-way intersection at the end of Haeundae Beach to reach the entrance of Moontan Road. Moon-shaped patterns돟 crescent moons, half-moons and full moons, are carved into the pillar at its entrance.

A climb down the stairs reveals dirt pathways through the pine forest Continue along the Haeundae shoreline and breathe the fresh air, rich with phytoncides. Full relaxation, completely outside of the city, is just moments away. A lookout, outdoor amphitheater and a slew of cafes await visitors along the trail. 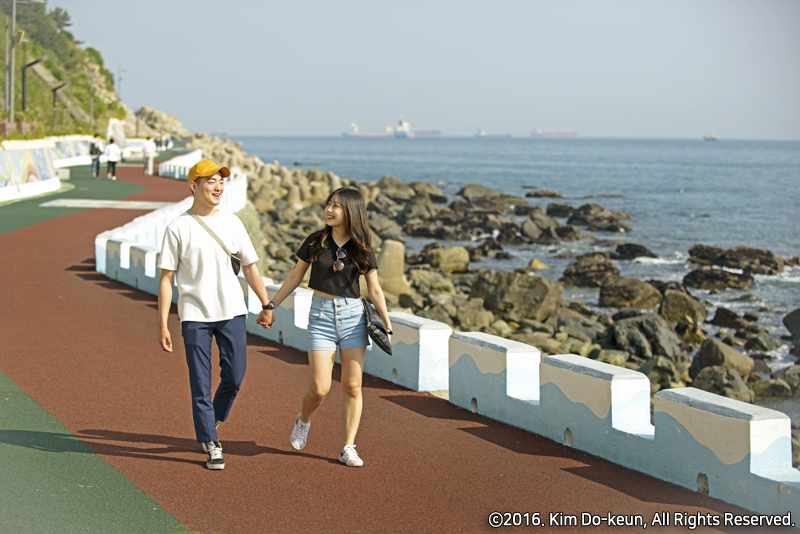 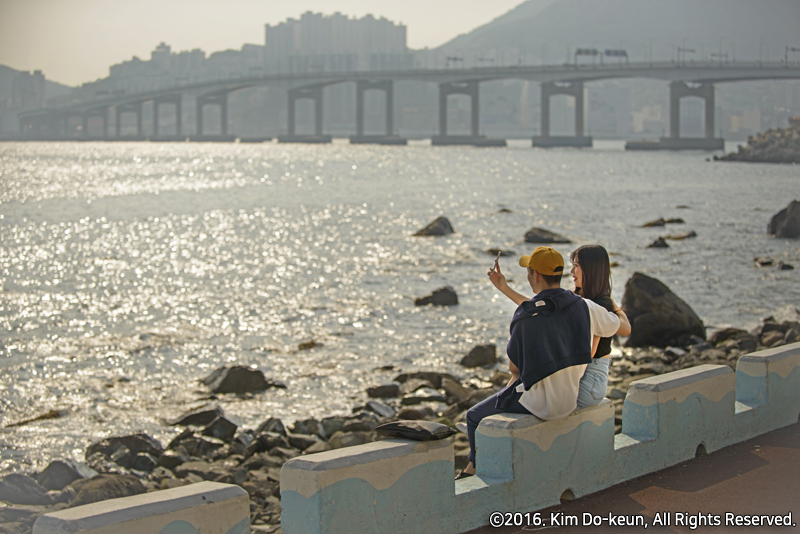 For those who are not satisfied just sticking to tourist hot spots, another option awaits in Yeongdo.

The island, connected to the mainland through the Busandaegyo Bridge and Yeongdodaegyo Bridge, has three kilometers of coastal walkway to be explored. The Jeoryeong Coastal Walkway is named for "Jeoryeongdo," Yeongdo's former name. The walkway stretches from Namhang-dong through Jungri Port to Taejongdae, entirely along the seaside.

Start the walk from the front of the Bando Bora apartment complex where mosaic murals offer a prime venue for photo shoots. Murals highlight Yeongdo's character and history. Lighthouses and Haenyeo, Korean female divers, are featured prominently in the paintings. The pathway to the village above the mosaic murals is also adorned with multicolored paint, and for this, it's known as "Piano Stairway."Murals and sculptures are installed at every alley between densely-packed houses.

Along the way, stop by the Haneul (sky) Observatory and check out the Namhangdaegyo Bridge. On a clear day, even Japan's Tsushima Island is visible.  Take the walkway over a suspension bridge to Jungri Beach for fresh seafood, and eventually to Taejongdae.

TSee it all in Songdo 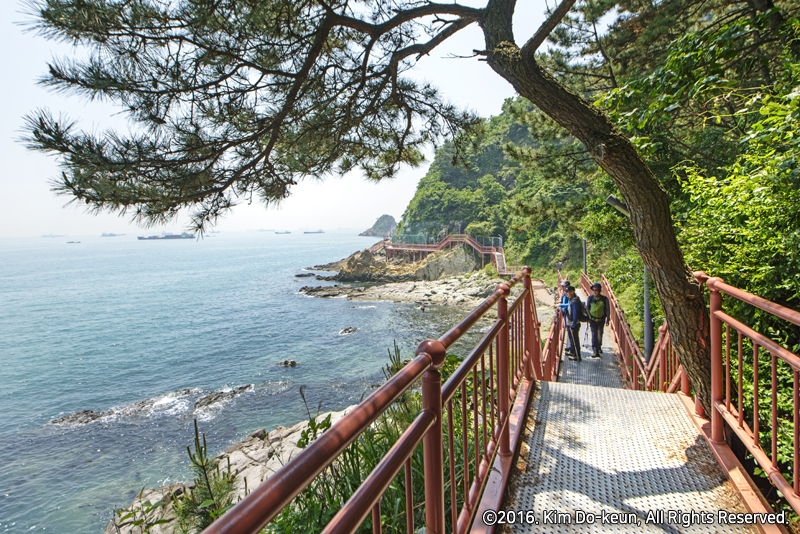 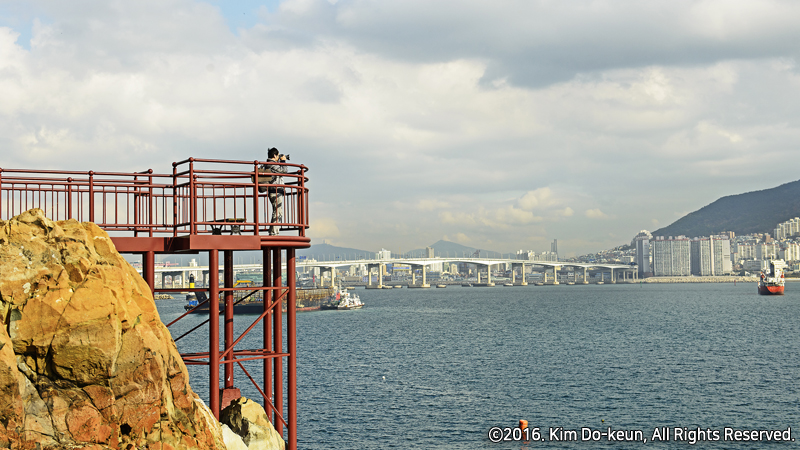 "Bollegil" is an amalgam of two words boda (to see) and dulle-gil (walking path) which translates to "the path with lots of things to see." Dense forests, ocean views and coastal strata fill the scene.

The Amnam Park eco-system, complete with its lush wild flowers, is well-preserved after remaining off-limits to the public until 1990s. Follow the walkway connected to Amnam Park over a suspension bridge to the Songdo coast and Busan National Geopark. The park also boasts an observatory and ideal fishing locations. Find educational displays at the end of the walkway and a multitude of dinosaur egg fossils and recently-discovered footprints.

A nearby pine forest park is also worth a visit. Musical fountains and pathways in the park are must-see stops alongside the Namhangdaegyo Bridge, from which Jagalchi Market and dozens of surrounding boats can be seen.