Runners will have many runs and races to choose from throughout 2020. 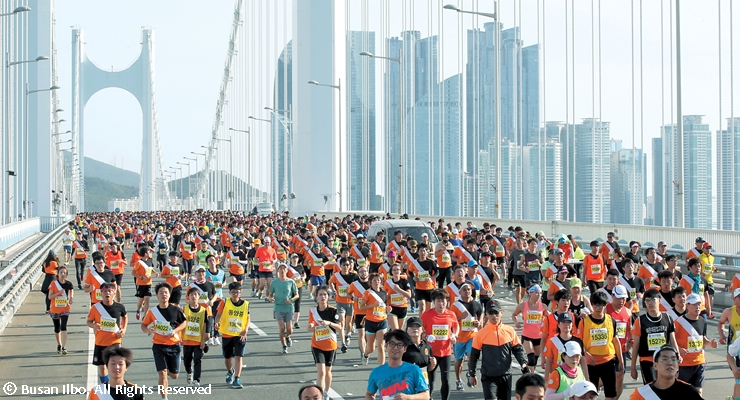 △ Thousands of people take part in running across Gwangandaeygo Bridge every year.

Beginning in the spring, the 20th Pink Run will be held at the Suyeongman Yachting Center on March 15. The event is part of the Pink Ribbon Campaign, which is aimed to promote women's breast health, and is held in five regions around the country. With about 370,000 participants from 2001 to 2019, the event has delivered a total of over four billion won in donations to the Korea Breast Cancer Foun-dation. The cost to participate in the event goes towards the prevention of breast cancer and supporting patients currently struggling with the disease. The race begins at the yachting center at 9 a.m. and follows a route through Haeundae Beach before turning back. Participation is a flat rate of 10,000 won.

On Saturday, March 21, the 18th KNN Eco-Friendly Marathon will be held. Participants can choose to run 10 kilometers competitively or non-competitively. Alternatively, runners may also choose a shorter, non-competitive course. The course goes through Millak Waterfront Park and Gwangalli before turning back to BEXCO from Samick Beach apartment.

On April 26, two marathons will be held. The first one, the third Gijang Bada Marathon, takes place along Gijang's coast. On the same day will be the 19th Busan Marathon, held at Samnak Riverside Sports Park in Sasang-gu (district). All participants will be provided with plenty of food, events and other spectacles.