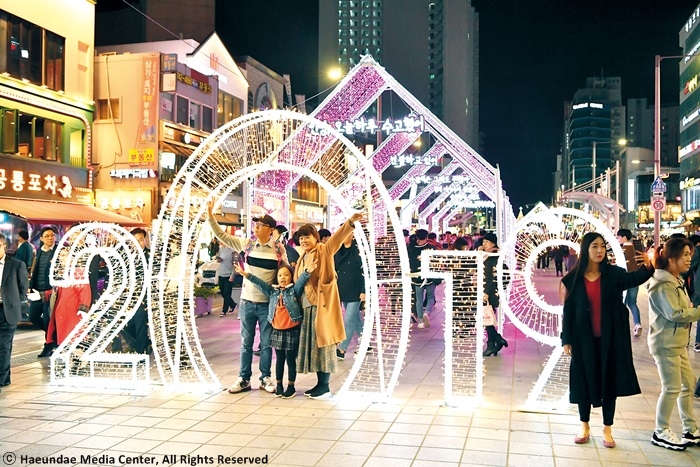 The Seomyeon Christmas Tree Festival is being held around the Norimaru Youth Center until Jan. 5. A large Christmas tree has been placed at the center's playground, and Jeonpo Cafe Street has erected a 3D-media photo zone for those who enjoy taking photos.

The Busan Christmas Tree Culture Festival is ongoing around Fashion Street, which is more formally known as Gwangbok-ro, until Jan. 5. There are additional lights installed at Yongdusan Park. The festival's main Christmas tree, a grand structure made of many lights, has been set up at the street's three-way intersection.

The Haeundae Light Festival is currently active around Haeundae Beach and Haeundae Plaza until Jan. 26. Blue lights in the middle of the beach have been installed to mimic the shape of waves. There are also Christmas trees, a light tunnel, a place to write wishes and a photo zone installed on Gunam-ro, which stretches from the subway station all the way down to Haeundae Beach.

Additionally, the Haeundae River Cruise LED Festival is running at APEC Naru Park until Jan. 31. LED lights have been put up around the park under the theme of "Light meets the river." Beginning in the middle of December, festivalgoers will be able to ride in a boat along the Suyeonggang River. 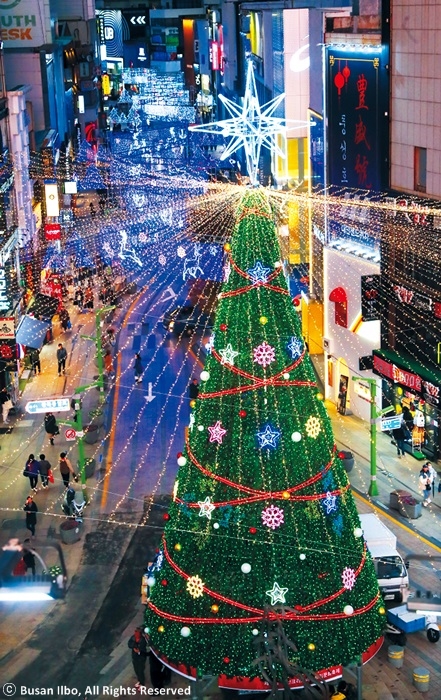 ▷ The city's Christmas lights are up and running.

In addition to the Christmas and lighting festivals, Yongdusan Park will celebrate the new year with its annual bell-tolling ceremony. Starting with performances in the evening, the event concludes with a ten-second countdown leading up to midnight and the first moments of 2020. Once the countdown is complete, a collection of people will toll a large bell 33 times, and the mayor will deliver his first speech of the new year.

Haeundae is also hosting its own New Year's festival. Large crowds of visitors will gather at the beach early in the morning on Jan. 1 to see the first sunrise of 2020, which is currently expected to be at 7:32 a.m.

The final event of the new year is the Polar Bear Festival on Jan. 5, which gives Busan's bravest citizens an opportunity to jump into the East Sea on a frigid winter morning. The festival is open to anyone who is healthy, and it has no dress restrictions. Participation is 20,000 won per person. Registration is open until Dec. 20 at bear.busan.com.