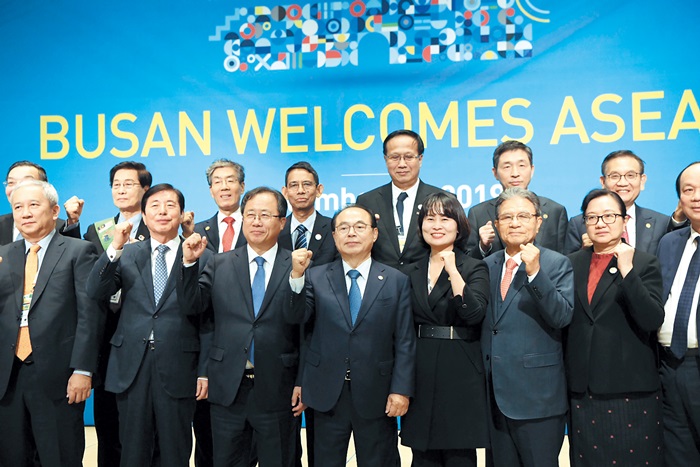 ▷ Mayor Oh lunched with around 200 ASEAN national officials and CEOs at the Park Hyatt Busan.

After two successful summits between the Association of Southeast Asian Nations (ASEAN) and five countries along the Mekong River, Busan has established itself as a cooperative hub for South Korea and Southeast Asia.

The city strengthened its international status and enhanced its brand image, taking advantage of tangible promotional efforts by expanding exchanges in economy, culture and tourism with the 10 countries in the ASEAN organization. Mayor Oh held numerous meetings with ent-repreneurs, leaders and heads of state to open a door for brand new possibilities between Busan and the Asian region.

On Nov. 26, Mayor Oh had lunch with approximately 200 national officials and CEOs from ASEAN nations at the Park Hyatt Busan. Speaking with Lim Jock Hoi, Secretary General of ASEAN, the mayor proposed the establishment of the ASEAN-ROK ICT Convergence Village, a hub for Southeast Asian students and a film organization for Korea and ASEAN.

City Hall has additionally prepared a program for Southeast Asian officials, journalists and business leaders to visit the city's industrial sites. It has also set up the Busan Tourism Information Center at BEXCO, in order to provide visitors with more convenience and additional city promotion. Further programs include a night tour of the original city center and other Busan attractions. The city's commerce industry also presented its vision for the future following the summit. The industry is expected to send an economic mission to ASEAN countries. The Busan Chamber of Commerce and Industry also plans to establish an ASEAN-ROK special economic committee for systemic exchange between Korea and Southeast Asia.

After four days in Busan, President Moon delivered a message of optimism돟 "It is time to cross the continent from Busan by land," Moon said. "We can't give up our dream of becoming an international bridge, even in the face of many difficult obstacles and hurdles before us. We can become a country that does not struggle among great powers, but one that connects them to create peace and prosperity.