▷ The leaders of 10 Southeast Asian nations will come together in Busan on Nov. 25 and 26 for the 2019 ASEANROK Commemorative Summit.

The longawaited ASEANROK Commemorative Summit will be held on Nov. 25 and 26 at BEXCO, to honor 30 years of relations between South Korea and the Association of Southeast Asian Nations (ASEAN).

ASEAN is a regional intergovernmental organization made up of 10 countries across Southeast Asia. The leaders of Brunei, Cambodia, Indonesia, Laos, Malaysia, Myanmar, the Philippines, Singapore, Thailand and Vietnam will all attend. The nations of ASEAN have become some of the world leaders in manufacturing and, as a result, are some of Korea's most esteemed trading partners. North Korean leader Kim Jongun remains noncommittal but may also participate in the summit.

A total of 10,000 visitors, including government officers and public entrepreneurs, are expected to come to Busan for the historic event. The president reaffirmed the importance of relations with the nations of ASEAN, citing them to be as important as diplomatic ties with the United States, China, Japan and Russia. Moon's government has additionally pledged support for the summit as a symbolic time, in order to celebrate its New Southern Policy. As a result, the president visited all 10 ASEAN countries in the time leading up to the event.

The New Southern Policy is the Korean government's largest national policy, and Busan seeks to become its central location. Busan previously hosted the 2014 ASEANROK Commemorative Summit, and City Hall hopes that Busan will become a symbol for peace on the Korean peninsula, as well as the center of cultural exchange between Korea and Southeast Asia.

The first MekongROK Summit will be held at the Nurimaru APEC House on Nov. 27, the day following the ASEANROK Commemorative Summit's conclusion. Member nations of the Mekong include countries around the Mekong River Cambodia, Laos, Myanmar, Thailand and Vietnam. 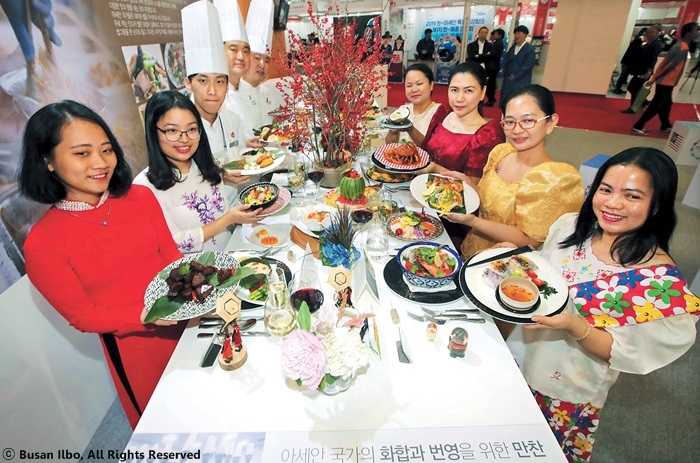 ▷ World Food Fair was held in October at Bexco and ASEAN food was also presented.

How to celebrate the summit

The ASEANROK Commemorative Summit is a time for celebration, and Busan is holding a multitude of events in honor of the twoday occasion. Cinephiles can head to the Busan Cinema Center on Nov. 15 and 16 to watch Southeast Asian movies. For a list of screening films and reservations, visit ach.or.kr. Reservations for screenings begin on Nov. 11. 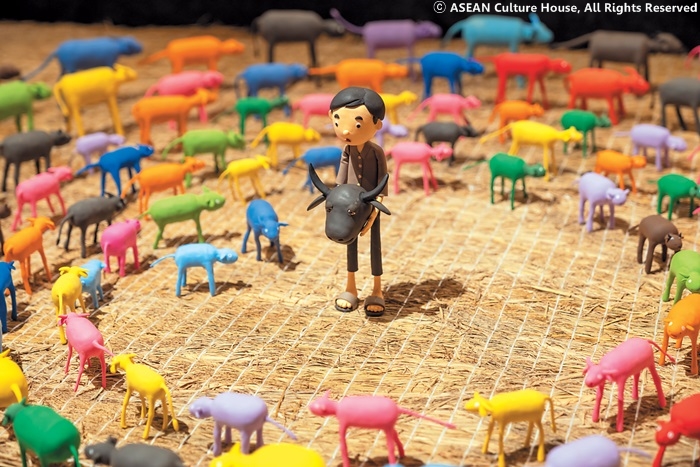 There are other aspects of Southeast Asian culture to be found, too, including religion and the arts. Those interested in the worshipping practices of Southeast Asia should visit Busan Museum for special exhibitions of Mahayana and Hinayana Buddhism.   Additionally, the ASEAN Culture House will hold a special exhibition for Southeast Asian handcrafts through Jan. 15. There, visitors can look at traditional Burmese umbrellas, the chairs of Filipino designer Ito Kish and the ceramics of Hans Tan, from Singapore. There are many other upcoming events to celebrate the summit, in the spheres of fashion, food and more.

▷ Students enjoy themselves at Easy Access Myanmar, which was held in ASEAN Culture House.

ASEAN Ways of Life Diversity and Unity : Through Dec. 31 at ASEAN Culture House

ASEAN Crafts From Heritage to the Contemporary : Through Jan. 15 at ASEAN Culture House