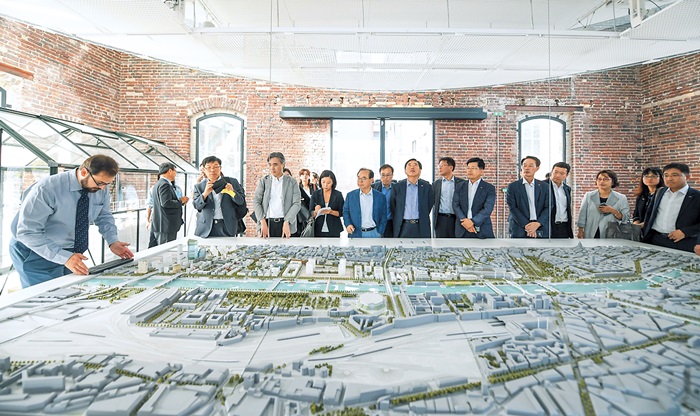 (Picture : The mayor's toup group listens to an explanation of urban restoration in Rive Gauche, Paris.)

Mayor Oh visited three European countries in order to further develop Busan's status as an international financial hub, discuss ways to restore urban areas (as part of the mayor's Great Restoration of Busan plan) and to promote the city for the 2030 World Expo. Read on to find out what the mayor got up to in Helsinki, London and Paris.

The first visit of the tour was to Helsinki, Finland, which in fewer than six months will become the first European destination to receive direct flights to and from Busan. The tour group met with Topi Manner, the CEO of Finnair, and Joni Sundelin, the director of Helsinki Airport.

Together, they decided to actively cooperate with each other for the stability of the international route. But Helsinki is just the beginning. Busan plans to open more long-haul routes to take advantage of the new gateway airport in the nation's southeastern region.

From Helsinki, the mayor continued to London for financial talks. Over 90 investors and financial experts attended a meeting where Mayor Oh discussed how much growth Busan has seen in the financial sector in the last 10 years. He cited the construction of the Busan International Finance Center in particular as a milestone.

The mayor additionally reported that a decade of preparation for a solid financial infrastructure was coming to an end, and that he is now waiting for exchange between Busan and London. Mr. Oh also stressed the importance of exchange during a time of financial uncertainty in Asia.

Before the meeting, the mayor met with the chairman of Z/Yen, a global commercial think tank. The two parties discussed Busan's role in carrying out policies in the name of financial innovation, including the promotion of the FinTech (financial technologies) industry and the attraction of foreign financial institutions.

While in London, the mayor also visited Level39, the largest FinTech support institution in Europe. There, Mr. Oh shared an initiative for the development of FinTech business models and its policies. Also in attendence was Xntree, a company involved in FinTech and Smart Cities.

The final leg of the London trip focused on urban regeneration.

Mayor Oh and London examined several railway facilities (including stations) as well as abandoned factories in order to see which ones have potential for restoration and transformation into city landmarks. Since the mayor plans to renovate much of Busan, this was an important meeting.

The final stop in London came with King's Cross Station and the Tate Modern Museum, to examine restoration cases of industrial facilities. Renovation of the train station garnered positive results on the surrounding area, while the museum was once an abandoned factory that eventually became a space for modern art.

Finally, the mayor paid a visit to the Bureau International des Expositions (BIE) to discuss the 2030 World Expo, which Busan hopes to host. Vicente Gonzalez Loscertales, secretary general for BIE pointed out that Busan remains competitive in its hopes to host the exposition and that whichever nation wins the job will be chosen by what it has to offer, rather than its location. This could be seen as reassuring, since Tokyo's hosting of the 2025 event has been noted as a potential wrench in Busan's hopes, due to the proximity between the two cities.

At the end of the journey, the mayor expressed nothing but optimism for Busan's future, saying, "The tour secured an engine for growth in Busan's development."