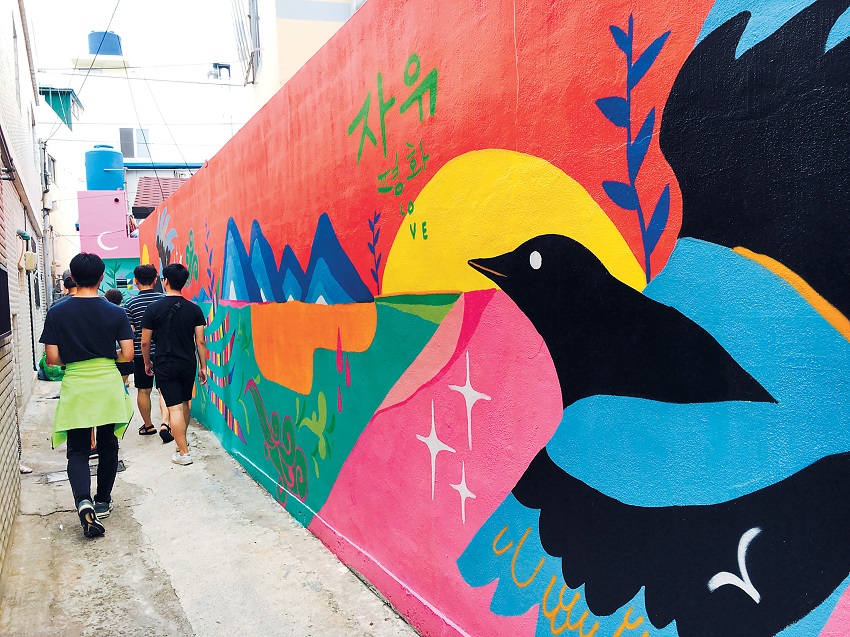 Kangkangee Art Village was recently awarded the coveted 2018 Regional Culture Brand Award prize by the Ministry of Culture, Sports and Tourism. The prize is valued at 30,000,000 won.

Kangkangee Village, located in Daepyeong-dong (neighborhood) in Yeongdo-gu (district), has transformed from its previous humble life to a place where history and art can coexist. The neighborhood played an important role from the Japanese colonial era (1910 to 1945) until the 1970s as a shipbuilding and repair site because of its easy access to the ocean.

In recent years, artists have worked together with local residents on murals, sculptures, exhibitions, culture programs and more with the singular goal of reviving what had become a faded village.

Impressive murals and dominating anchor-shaped sculptures adorn many corners of this area. Several different programs have drawn further attention to the area, such as television programs, local artist exhibitions and more.

Last year's Busan winner to the take the grand prize in the regional contest was Ibagu-gil, located in Choryang-dong, Dong-gu.

"Busan will put more efforts into adding value for local cultural branding in Busan, and hopefully we can discover together new culture tourism resources that can benefit the entire city," a city official said.

-How to get there: Nampo Station (Metro line 1), exit 6. Take bus 6, get off at Yeongdo Telephone Company. Turn back on the bus route and pass a crosswalk. Turn left, enter an alley. Walk straight along Daepyeongbuk-ro by the ocean on the right.