Between the hours of 6 and 8 p.m. every night of the week, one show on BeFM radio provides insight into local events, Korean culture, people and films: Inside Out Busan. Host Mike Payne-Wheeler has the privilege of interviewing some of Busan's most Q: interesting people and being the voice that speaks to citizens as they drive home in the evening. 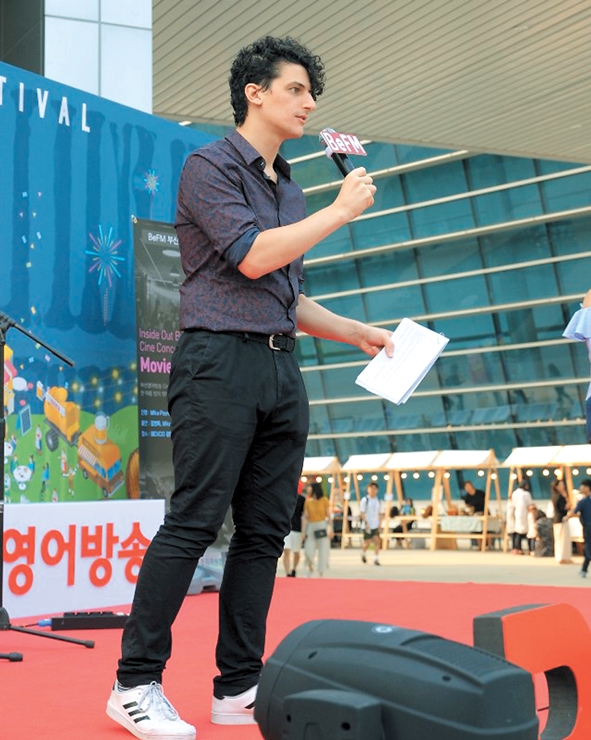 Q: How did you get involved in radio and Inside Out Busan? Was it something you always wanted to do?

A: No, in fact I have a background in theater acting, so radio was the furthest thing from my mind! My time at BeFM began through sheer chance. I was at a friend's house one day, and someone who was a guest on a morning show was leaving soon and offered it to my friend, who turned it down. The opportunity sounded interesting, so I said yes. I got the guest spot, and then two more. A few months later, the radio station gave me an hour-long movie show from Monday to Saturday. I did that for six months, and then after that they gave me Inside Out Busan.

Q: What does Inside Out Busan aim to do every night?

A: Inside Out Busan delivers local, domestic and international news, and it covers community and cultural events, which could be as small as a Friday evening poetry reading somewhere or as grand as the yearly film festival at the Cinema Center. We want to keep people informed about what is going on in our city, our country and our world. And we do that in a way that is interesting, engaging and entertaining. Or, at least I hope it is!

Q: What's your favorite part of living in Busan?

A: The film festival, of course! I get to interview a lot of famous filmmakers, and I get to see some of the year's best movies from around the world.

Speaking of movies, what do you cover on Cine Concerto, your weekend movie show?

We go over new theatrical releases of the week, movie news, box office figures, sometimes we delve into a bit of cinema history, and then, of course, any big events, like film festivals and the Academy Awards, we really get into. But we also have guests on the show for in-depth discussion, a game with sound bites, film trivia and plenty of music, which could be pop songs from movies or great film scores.

Q: Which is your favorite to do between regular Inside Out and the weekend edition?

A: I love hosting both, but I have a lot more creative control of Cine Concerto, so that show is really my baby. It's a lot more flexible and features more banter and fun. Some days will feature more music, some days a bit more talk. We have a segment on Sunday that's different every week. The Monday through Friday edition is mostly a news and information pro-gram, so there's a little less room for all that, but I'm always privileged to be the person at the mic.

Q: How can people listen to you?

A: Tune your radio to 90.5 or download our BeFM app onto your mobile device. Inside Out Busan is at 6:07 p.m. on weekdays after the news and 6 p.m. sharp on weekends.