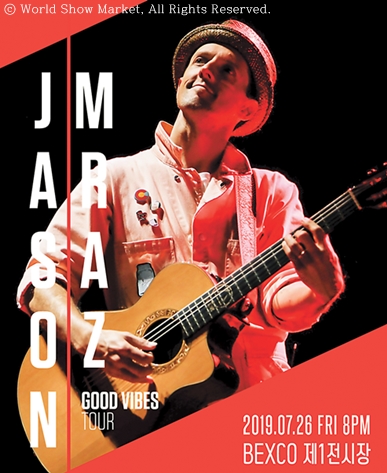 Two-time Grammy winner Jason Mraz, known for his vocals, songwriting and guitar playing, will perform in Busan at BEXCO's first exhibition hall on Friday, July 26 at 8 p.m. The concert is part of his Good Vibes world tour, to celebrate and promote the release of his sixth album, "Know." The show will be a standing concert, which will allow fans to be closer to Mraz and will let them better interact with his performance.

Mraz initially gained some recognition as part of the coffee shop scene in San Diego, California. He formally in 2002 with the album "Waiting for My Rocket to Come." He reached unprecedented success with the song "I'm Yours," from his third album "We sing. We dance. We steal things." The song went multi-platinum in over 20 countries and stayed on the Billboard singles chart for 76 weeks, at that time an unheard-of record. Mraz won two awards at the 52nd Grammy Awards for Best Male Pop Vocal Performance and Best Pop Collaboration with Colbie Caillat.

This is not Mraz's first performance in Korea. In fact, the artist has performed in the country several times throughout the years and continues to have an affinity for the country.