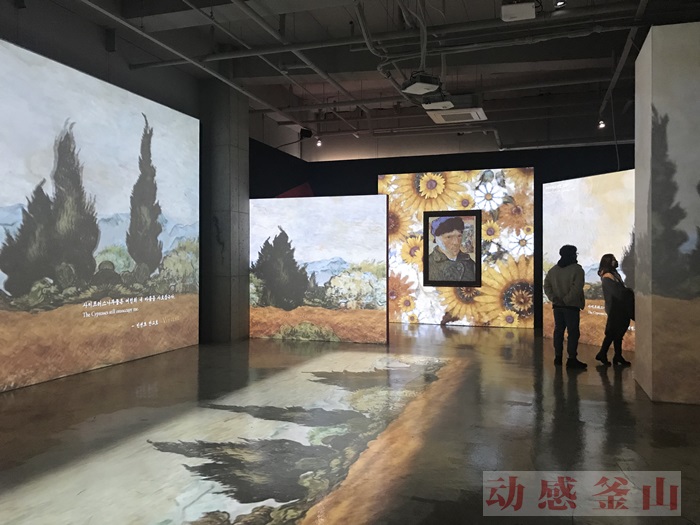 Take a look at Van Gogh's work like never before.  By Mao Dandan

Sometimes, great art from human civilization is thousands of kilometers away. Sometimes, it's not as far away as you think. The "Van Gogh Village," which displays digital recreations of Vincent Van Gogh's work, is an exciting exhibition showcasing the convergence of technology and art.

Van Gogh is one of Korea's favorite international artists, and his work has been digitally recreated in the Van Gogh Village, which is a part of the greater Busan Bon DaVinci Square in Gijang.

Convergence art is a genre that uses technology to recreate familiar artworks in completely new ways. In total, visitors can view around 350 of Van Gogh's works on giant HD screens, including "Almond Blossoms," "Wheatfield with Crows," "Sunflowers" and "The Starry Night." The center also provides VR and photo zones.

Van Gogh was born in 1853 in Zundert, Netherlands. Throughout his life, he focused on drawing and painting. One of the most famous known traits about Van Gogh was that his ear was mutilated, though how this happened is not completely clear.
On July 27, 1890, Van Gogh shot himself in the chest with a revolver. There were no witnesses to the shooting, but he was tended to by doctors. He died 30 hours after he shot himself, at the age of 37.