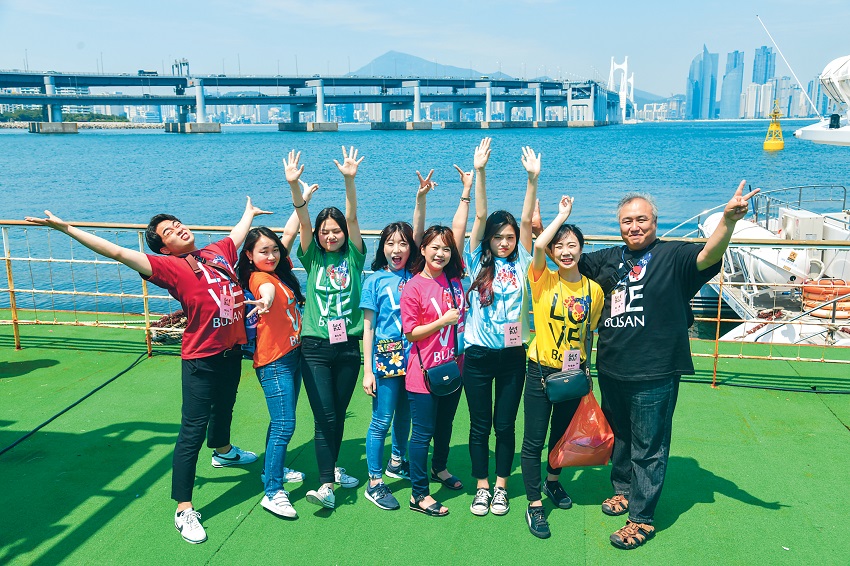 Some of the regular contributing members of Waboiso Busan, including founder Masayuki Kon (far right).

Are you new to Busan and wondering where to eat, what attractions to visit or just how to succeed in this bustling, sometimes overwhelming metropolis we all love? For the Japanese creators of the YouTube channel "Waboiso Busan (와보이소 부산)," the mission was simple: how can we promote our beloved, adopted home city? The channel, which currently has 29,000 subscribers, has sought to do just that. Its broad range of con-tributors, including office workers, teachers and foreign students living in Busan, have provided over 200 videos introducing restaurants, festivals and activities throughout Busan since November 2015.
"Our channel is usually run by one or two content creators, but we actually have about eight regular contributors making interesting videos," said Waboiso Busan team leader Masayuki Kon. Kon, who is an international trader by day, said he saw tremendous appeal in creating such a channel due to the number of Japanese people already living in the city.
Kon first arrived in Busan to finish his doctorate at Korea Maritime and Ocean University in 2011. "I hoped to socialize with the Busan community as well as earn a living," he said regarding launching his international trading company soon after. "I wanted to make a platform where people from Busan and Japan can carry out a cultural exchange and establish Busan Love, which is a non profit organization."
Busan Love gathered those who have expressed an appreciation for Busan, its people and its culture. It remains active through Korean-Japanese exchanges, voluntary service and promotional activities, such as Wa-boiso Busan. "We hoped to introduce our lives in Busan to our families by making the videos," Kon added. The Waboiso Busan channel (which can be viewed in English utilizing the "auto translate" function) offers a variety of content. The team has participated in live broadcasts of the Gamcheon Cultural Village Alley Festival, showed their subscribers how to get fried chicken delivery as well as navigated Korean traditional markets. 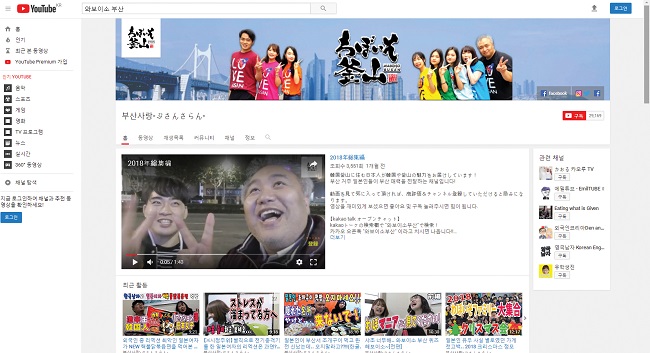 Among their most popular content is their mukbang videos. In these videos, participants eat on camera ("mukbang" literally means "eating broadcast" in Korean). This style of video has exploded in popularity not only in Korea, but also in Japan and across the Internet all around the world. The video hosts frequently visit their most favorite restaurants in order to introduce tasty foods to their subscribers.
"Our YouTube page members are usually working in Seomyeon or Jungang-dong (neigborhood), so we know a number of hidden restaurants that we like very much," said Mana Okada, another member of the Wa-boiso Busan video team.  "I think that our subscribers like this kind of content, because through these videos they can find out where the best restaurants, in which locals most go to, are located," Okada added.
Waboiso Busan continues to gather more and more subscribers, not only from Japan but from other countries. Its contributors hope it will continue to play an important role in better connecting Korea and Japan for years to come.

To check out the Waboiso Busan videos (in English utilizing the "auto translate" option), search for "Waboiso Busan" on YouTube.