Busan is a culinary haven for those who love delicious seafood, particularly when it comes to mackerel, eel, shellfish and octopus. But there is one seafood that reigns supreme in the winter and spring months: snow crab. 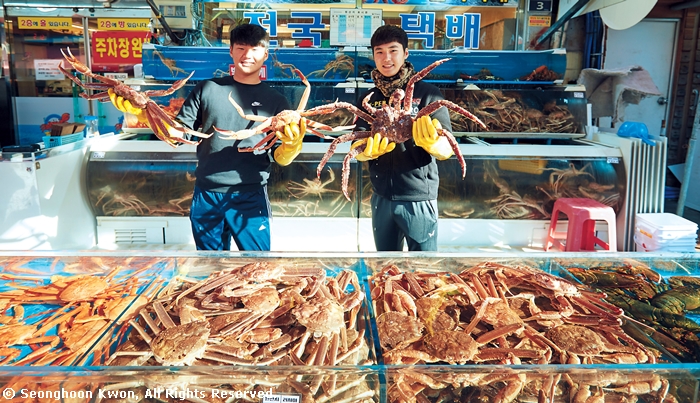 A food low in fat and high in nutrition, Gijang snow crab hits all the right notes. Rich in protein, essential amino acids and minerals, snow crab can help to boost your immunity and also provides children with what they need to grow. Snow crab is in season from November until May, and there's no better place to go for it than Gijang-gun (county), in the eastern part of the city.

Busan is known for its varied cuisine, with seafood being one of its staples. As a result, the Busan Tourism Organization is holding a campaign aimed at foreign tourists to promote Gijang snow crab through March 31. The organization has created a menu consisting of one kilogram of snow crab, fried rice, doenjang jjigae (soybean paste stew) and small side dishes. In total, the promotion charges 50,000 won per person, which is down from what would normally be 60,000 won for a kilo of crab without any rice, stew or sides. 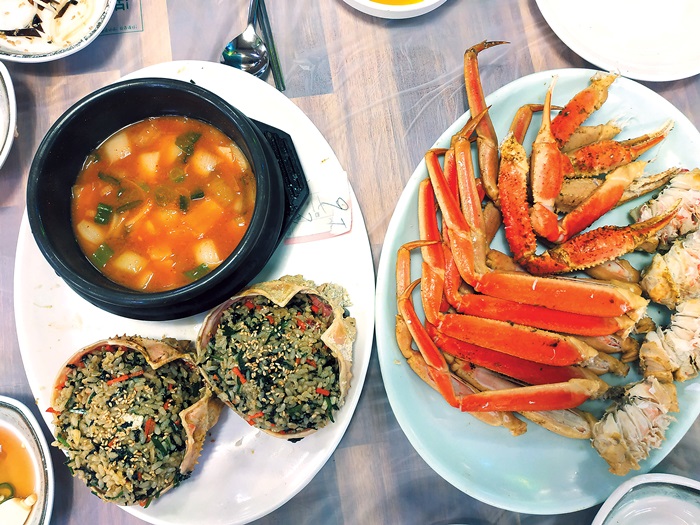 △ Enjoy your crab legs for a discount rate with stews and side dishes.

The menu has been set for nine different restaurants in Gijang. Eight establishments can be found at Gijang Market. The final one, the East in Busan, is located around the Hilton Busan. Also available at each restaurant is unlimited alcoholic beverage service from 5 to 9 p.m., for 20,000 won.

During the promotional period, the Busan Tourism Organization is operating free shuttle buses twice a day to make it easier for diners to go to Gijang. The bus departs from Busan Station at 11 a.m., stops by the SeaLife Aquarium in Haeundae at around 11:40 a.m., and then leaves the market at 3 p.m.

The next bus leaves Busan Station at 4:30 p.m. and follows the same route with a Haeundae departure at 5:10 p.m. The bus leaves the market at 8:30 p.m. to return to Busan Station. About three hours are available to you to enjoy the crab and everything that comes with it. 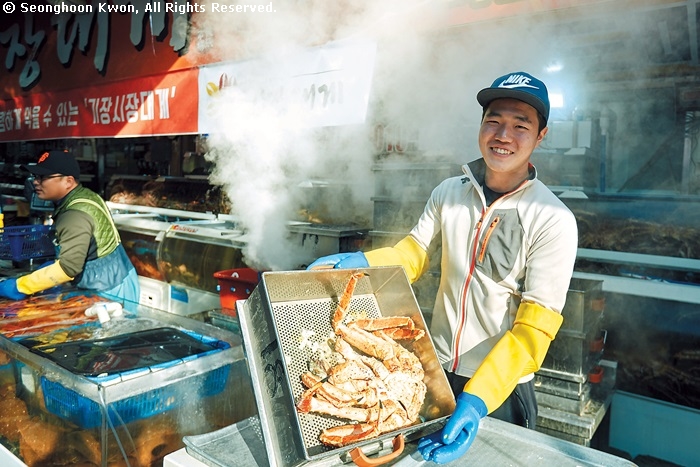 You can choose the snow crab you want to eat once you arrive at your restaurant of choice. It is recommended you select one that has a full body and legs that are actively moving.

The buses leave from Gijang at designated times. Those who don't want to wait for the bus can visit nearby sites like Haedong Yonggungsa Temple, Songjeong Beach and Ilgwang Beach. From there, you can decide to return to Gijang for the bus or find your own way home.

Gijang Market to Haedong Yonggungsa Temple: Bus 181. Get on at Gijang Elementary School and get off at the National Institute of Fisheries Science.