Walk among decades of change in Centum City

Walking Busan With You 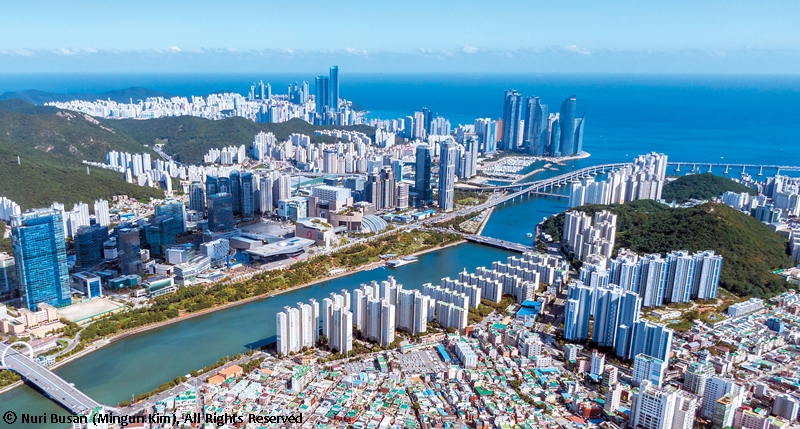 △ Centum City is a state-of-the-art neighborhood that stretches along the Suyeong River and houses much of the city's media.

Jung-gu (district), Yeongdo-gu, Dong-gu and Seo-gu are the traditional areas that make up the city center, but what is the modern hub in 2020? With its abundance of skyscrapers and media presence, Haeundae-gu's Centum City, the so-called "Manhattan of Busan," stakes its claim as the new center.

Originally known as the Busan Information Complex, the "Centum" name was selected by a poll in 2000, after Latin for the number 100 and reflecting on how the new part of town was 100-percent a state-of-the-art city.

Let's take a look at what there is to explore as we walk through this architectural marvel! 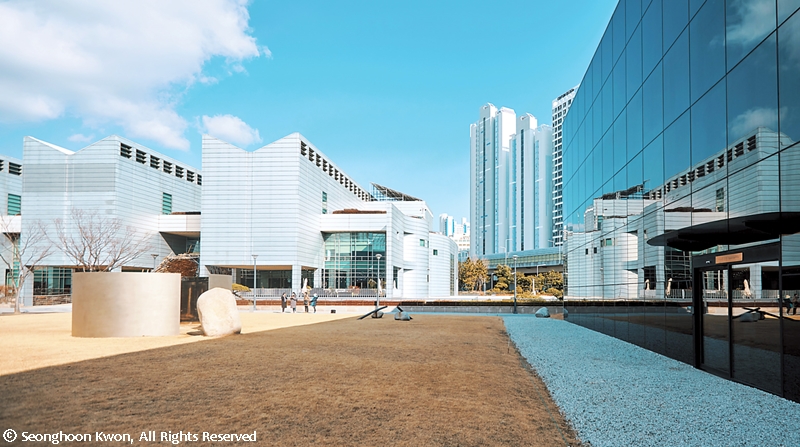 △ The Busan Museum of Art's architecture is art in and of itself.

The Busan Museum of Art is a great place to begin a walking tour of Centum City. If you pay a visit to the museum, which opened in 1998, you'll be able to see that the museum's buildings are shaped like the letter "M," which is meant to embody the waves of Busan's waters. Even with this design, however, the actual structure of the museum was deliberately created to be a little less than awe-inspiring, so that it wouldn't steal the spotlight from the exhibitions themselves.

Below ground, The Sunken Garden is very impressive. Due to altitude restrictions from the old Suyeong Airport, the museum was unable to build a garden at their desired height, so they planted one below ground and used technology to allow light to shine down to the basement.

On the other hand, Space LeeUFan, the annex building of the establishment which opened in 2015, is in perfect harmony with the exhibitions. Named after the Korean minimalist painter Lee Ufan, the artist decided to display his works through basic design, building height and space composition.

The exhibition hall is located in front of the overpass to prevent noise and to keep the area inside in harmony with the main museum's structure. This reflects the idea of the building acting as part of the artwork itself. Together, the two structures form a sort of "L" shape, as well as a connection of two different artistic philosophies. The two halls are connected to the Busan Exhibition and Convention Center (BEXCO). 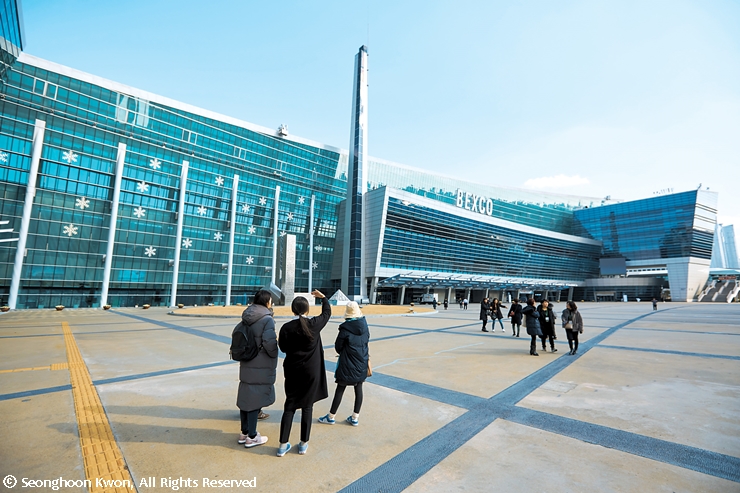 Following the construction of Centum City, BEXCO was launched in 2001. The large facility is home to numerous exhibitions throughout the year and has hosted many important events in the city's history. In under 20 years, BEXCO has been the site of the draw ceremony for the Korea-Japan World Cup, APEC 2005, the International Labour Organization's Asia-Pacific Regional Meeting in 2006 and the ASEAN-ROK Commemorative Summit last November.

Crossing the street around BEXCO Auditorium, you'll run into Shinsegae Department Store, listed by Guinness World Records as the world's largest shopping facility of its kind. In fact, this designation is one of two Guinness World Records held by Centum City (the other being held by the Cinema Center). Significantly, Shinsegae stole the record away from New York's Macy's Department Store, which held the title of world's largest for over 100 years.

The exterior features a glass structure in the shape of rolling waves, the trademark image of Busan. Inside, you'll find the department store selling their goods, as well as Spa Land, chain retailers, an ice rink, CGV cinema and a food court. But, one of the best parts of the department store is the concourse. Department stores are usually known to keep windows and clocks out of sight, so as not to distract shoppers, but Shinsegae does things a little differently. With a circular interior, shoppers can look up to see all nine floors at once, creating a great feeling of space and openness, a feature also shared by the newer Shinsegae Centum City Mall connected to the main department store.

Speaking of the mall, the connecting bridge between the two structures is called the Cloud Bridge. Once you cross it, check out the open-air square on the seventh floor. It originally planned pubs and outdoor shops, but eventually became an English kindergarten. Find a view to enjoy a cup of coffee as you enjoy a view of the APEC Naru Park and Suyeong River.

Across the street from the Shinsegae Centum City Mall is Busan's pride and joy: the Busan Cinema Center. The primary site of the annual Busan International Film Festival, it is the holder of the second Guinness World Record, due to it supporting the world's longest cantilever roof. The roof is also shaped like a wave and is supported by a single pillar. During times of extreme weather, such as typhoons, the roof has the ability to further stabilize itself by temporarily raising another beam on the opposite side of the first one. The Cinema Center consists of Cine Mountain, a nine-story hall containing movie theatres, as well as BIFF Hill, which is a multi-purpose facility complete with conference rooms.

Beside and surrounding these impressive facilities lie a large array of offices and media centers, such as the Cultural Contents Complex, BeFM Radio, KNN Tower, Sohyang Theater and Dongseo University's Centum City campus. Throughout the years, Centum City has come a long way, but changes and growth continue to occur. The construction of the Korean Film Council building is underway, and a plan to expand Centum City in other ways has been announced. 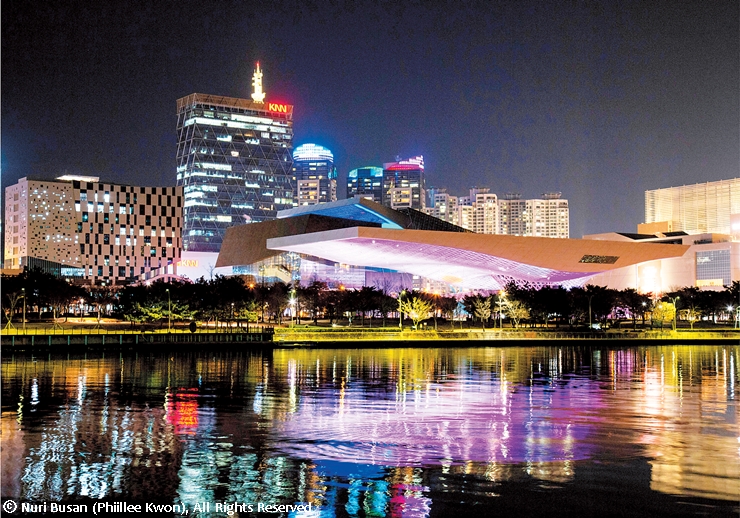 △ Enjoy a walk along the Suyeong River and take in all the lights.

Three more places to check out

2) Zooraji Shinsegae Centum City: On the roof of Shinsegae Department Store is a playground for kids with themes exploring dinosaurs, Africa, trees and pirates. Zooraji is a fun place for kids to visit and a refreshing break for the parents after a day of shopping. If you present a receipt of purchase from the department store, you can ride the carousel free of charge.

3) City of Stars, Busan Cinema Center: Dress up in your best outfit and take pictures like a celebrity standing on the red carpet! Don't wait too long, because this event is running until June 27.