The digital version of the exhibition catalogue of Sustainable Museum: Art and Environment can be downloaded through the link below. 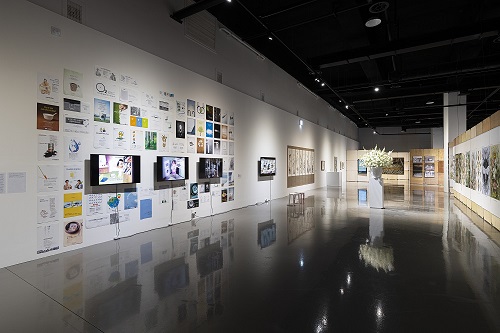 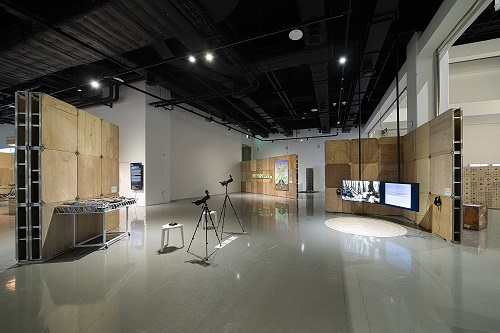 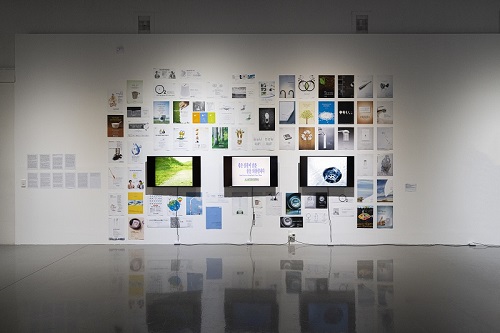 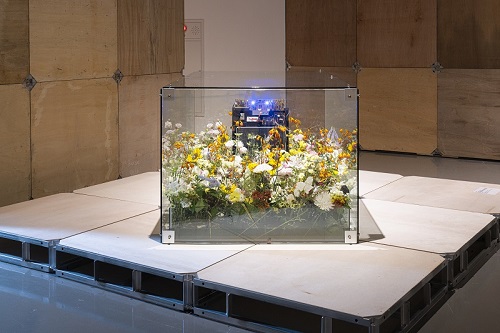 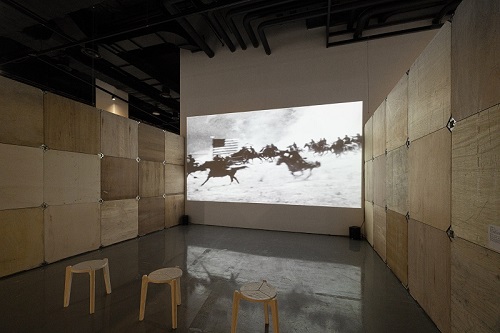 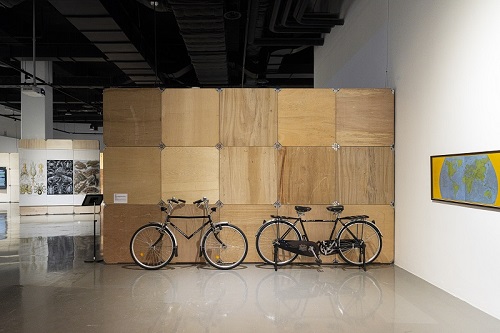 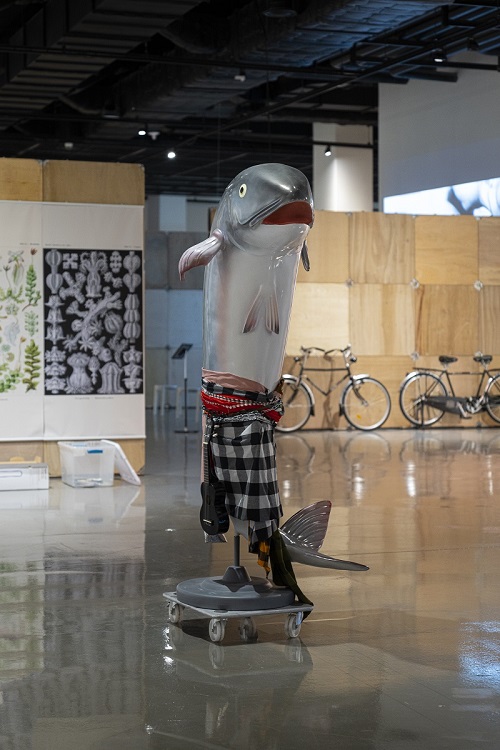 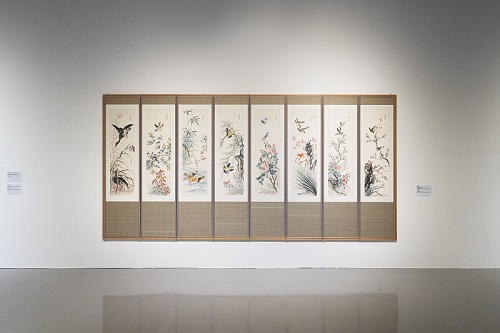 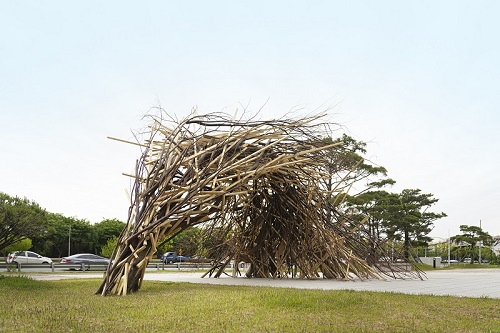 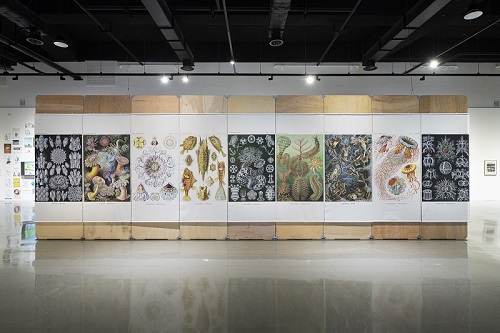 The following is a real example of the problems we face!

A total of six artworks departs from New York and arrives at Museum of Contemporary Art Busan.

The combined weight of the artworks is 1,273 kg.

During transportation by air, carbon dioxide emissions of 15.98 t(tCO2eq)1) are generated.

The distance from ICN to Museum of Contemporary Art Busan is 432.54 km, and carbon dioxide emissions of 0.12 t are generated during transportation by truck.

This figure is more than double the annual carbon emissions per person in Korea (14.1 t based on 2018 figures).

Transport by air takes approximately 15 working days from New York to the Museum.

If the same six artworks are transported by sea from New York to the museum, the total distance is 37,354 km, but the total carbon dioxide emissions are 0.82 t, approximately 1/40th that of air transport.

The time required, however, is about 60 working days; four times longer than by air.

It is undeniable that environmental destruction is occurring rapidly, as studies and reports continually present dire warnings.4)

And things are definitely being done.

However, Sustainable Museum: Art and Environment begins with the observation that there is no mention of exhibitions, of resource-intensive spectacles and the museum system that enables such exhibitions, in this era of growing awareness of the environmental crisis.

The intention is not to highlight the hardships facing museums, nor to condemn them. The key point is to acknowledge the reality of the situation facing museums, which have been protected by the capitalist world order. In other words, the fact must be recognized that current museum systems, created under capitalism and now near universal, are maintained at the cost of violence towards and destruction of the environment. The future envisioned by this exhibition must emerge from that which exists in the present and, in general, that which exists in the present must first be properly understood if we are to reach the future.

Such awareness should immediately lead to a more intensive search for possible alternatives that can be implemented in order to change the systems which currently dominate. Through presenting various new strategies5) and practices6) nd their potential results, we attempt an escape from our present vicious cycle of failure.

While the exhibition will offer a critical point of view of the current situation and is intended to provoke debate, obviously it does not provide a clear path towards achieving environmentally sustainable museums; the simple reason being that such a path does not exist, at least at present. Rather, the exhibition aims to help establish the foundations and suggest a philosophy for sustainable museums rather than presenting comprehensive solutions.7)

Unsurprisingly, this exhibition will be welcomed by some and taken somewhat skeptically by others. The two perspectives may be at odds, but we will eventually have to come together to combat the problems we have caused.

This exhibition encompasses not only an environmental approach to art, but also explores scientific knowledge, social movements, and years of intensive and amicable academic cooperation. While there is a clear sense of encouraging relief in such an exploration, there is also frustration that not everything can be properly considered or applied. Whether intentionally provocative or not, the exhibition has entered the debate, and debate should be welcomed, as it leads to understanding. Debate can eventually bring about profound transformation, but can also prompt smaller, incremental changes that might not appear so important at the time.

2) The calculation of carbon dioxide emissions was aided by Gallery Climate Coalition (https://galleryclimatecoalition.org/carbon-calculator/)

3) The six artworks in this exhibition shipped by sea. That is not to say that air transport is always bad. Air transportation can offer advantages over sea transport in terms of safety or the insurance premiums of artworks.

4) Some parts of this writing borrow a literary technique called detournement developed by Situationist International. A detournement, meaning “hijacking“ in French,  similar to dada collage, is a technique that aims to imitate and reorganize creatively existing sentences and phrases. It has the disadvantage that the reader should be somewhat familiar with the content of the original, to allow proper appreciation of the new message, but it also has the advantage of being able to destroy the knowledge of spectacle and create new concepts functionally, reasonably and efficiently. This advantage is also in line with the exhibition’s concept of eco-efficiency, which minimizes environmental impact and maximizes results through efficient use of resources.

6) To minimize waste, drywall is not to be used, nor paint and vinyl sheets except for entrance ways. All walls used in the exhibition will be collected and reused, with no waste left except fixings such as screws, nails, and wires, and paper used for artwork captions. All promotional prints except external banners are to be printed in one color to reduce ink usage, and production of unnecessary promotional materials such as posters, invitations, streetlamp banners, tote bags, etc. shall be avoided. All promotions will be based online, and the size and number of files will be minimized to reduce the resources involved in transferring digital files (carbon dioxide emissions from transmitting 1 GB of data are approximately 3 kg). Text inside exhibition halls will make use of monitors and handwriting for ease of modification, with a view to establishing comparisons between which method is more sustainable long-term based on power and labor used. To minimize air transportation, artworks from distant locations are to be shown via live broadcasts or reproduced locally following receipt of necessary production instructions. Some collections will be printed after downloading scanned digital files to eliminate the need for transportation and artworks are to be printed using soy-based ink and eco-friendly paper where possible. Amounts of electricity used in video works will also be measured, with optimal levels to be ascertained. As a matter of principle, all materials used for the transportation and installation of artworks will be recycled, and power usage, such as use of tools, and carbon dioxide emissions during transportation and installation of artworks will be measured. We will also minimize lighting in exhibition halls and use LED lights if necessary. In the case of newly-made artworks, various eco-friendly materials will be used, and the results will be analyzed to study the sustainability of new artwork production. All analyses and potential practical plans not put to use in this show will be published subsequently in the accompanying exhibition catalogue. We acknowledge that there is controversy regarding some of these practices. For instance, there are arguments that soy-based ink or eco-friendly paper are not especially environmentally friendly, and it may also be difficult to provide any guarantee of a basic minimum level of quality for viewers due to such excessive restrictions.