The craft beer scene in Korea has grown exponentially in the last several years. Where once the country was limited to large companies, smaller businesses with their own visions of what beer should be have entered the fold. Busan's own Galmegi Brewing, headed by CEO Steven Allsopp, has introduced a generation of Busanites to craft beer. 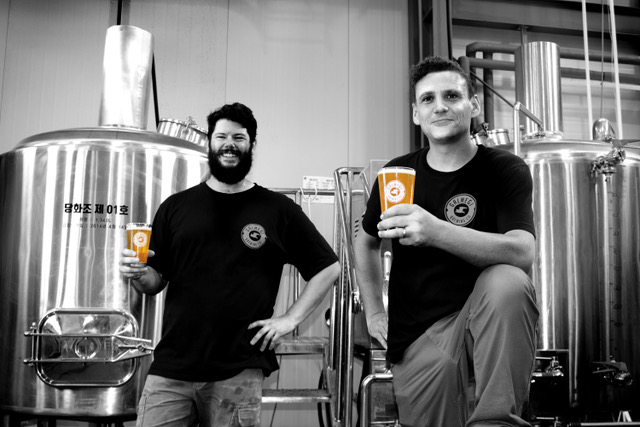 Q. Could you introduce yourself?

A. My name is Steven Allsopp. I am from Scotland, and I am obsessed with beer! As a graduate of finance at the height of the financial crisis, there wasn't much in the way of jobs back home, so I decided to take a year to live, work and travel overseas. I had fond memories of Europe and its beaches, and I decided that beach accessibility would be high on my list of criteria when choosing where to live. This eventually brought me to Busan, and after 10 years, it has become home.

Q. How did you start brewing and what's behind the "Galmegi" name?

A. Brewing for me initially started as a hobby. Prior to my relocation to Korea, I was surrounded by an ample variety of different styles of beers from different countries. When I arrived here, my choice was limited effectively to two, both of which tasted the same and didn't offer me much in the way of flavor.

Growing up, I knew of a great-great-great grandfather who started a brewery in the early 19th century and shipped his creation (the original IPA) all over the world. I decided to start making my own beer at home with my friend Ryan and a 40,000-won collection of plastic buckets and pots, alongside 40 empty glass bottles acquired by begging local bar owners for their recycled bottles. This started the obsession I have had with beer and its production ever since. Every weekend, me and Ryan would disappear into our ever-growing brewing setup and emerge after six hours with our latest batch. The feedback and offers to buy our product led us to believe that there was a business here. The name came naturally, as the seagull is the symbol of the city which had adopted us all and became our home.

Q. Why is Busan special to you?

​A. Busan has been good to me. I consider it the city in which I became an adult. It is the city where I first gained professional employment. It is where I met my wife. It is the city which, as a 23-year-old with nothing more than 50,000 won and a suitcase full of clothes, has provided an excellent quality of life and provided a wealth of opportunity. I love the food and I love the culture!

The people of Busan have always welcomed me warmly. From my employers over the years, the students I taught and the friends I made, to my wife's family members who have treated me like one of their own since we first met. Whilst the color of my skin may not be typical for someone from this city, I consider myself a Busanite.

A. Buk-gu (district) wanted to create their own brand of beers that would eventually revitalize the area with modern options for drinking and dining. When Buk-gu initially approached us with the idea, we jumped at the opportunity, as it ties in so strongly with who we are and what we have always aimed to achieve as a company.

Q. What are your future plans?

A. Due to the current restrictions on our capacity and our belief that beer should be refrigerated for freshness at all times, we are only able to make our product available in venues capable of storing and dispensing it in a specific way.

I am confident that more and more bars and restaurants will see the benefits of installing such a system, but the best way for us to reach more people will be to package our beer in cans and bottles to be sold in convenience stores (or supermarkets willing to refrigerate) so that more people will be able to access and enjoy what we have to offer.