"There is a small island where you can sleep on a wave of frozen moon shadow and gather strong waves in the middle of winter, so think of the holy and beautiful love of the lighthouse keeper." Those are the lyrics to the Korean children's song "Lighthouse Keeper." Lighthouses and those who keep them are beloved cultural symbols of trust and devotion, and Korea's love of them comes through in song. Busan itself is home to 88 lighthouses, including two that are manned.

Although technology has reduced the importance of lighthouses, they still serve as a necessity for nighttime seafarers. Recently, stories and legends surrounding these beacons have come to light, attracting tourists in turn.

The lighthouse that sits atop one of the Oryukdo Islets, dubbed "Lighthouse Island," is an icon of Busan and was designated as one of the nation's national cultural heritage items. The lighthouse has been regarded as a symbol of the city for over eight decades and began operating as an unmanned lighthouse last year. 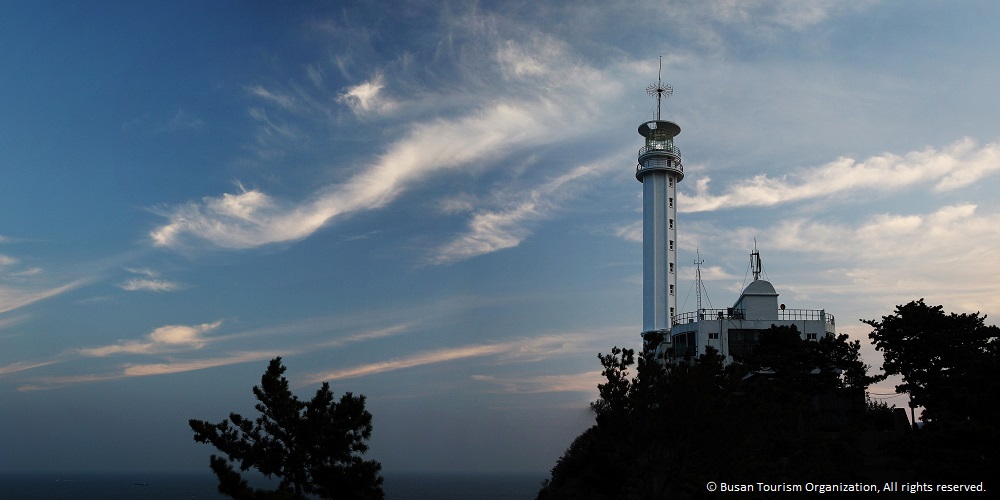 On the cliffs of Guksubong Peak, south of Gadeok-do Island, Korea's past and present stand side by side. A small Russian-style lighthouse, built in 1909, serves as a distinctive contrast from its neighbor: the nation's second-tallest lighthouse, constructed in 2002.

The former is highly valued for its history and original, intact architectural integrity. The latter presents 198 steps to those who'd like to see a fabulous view of the sea. 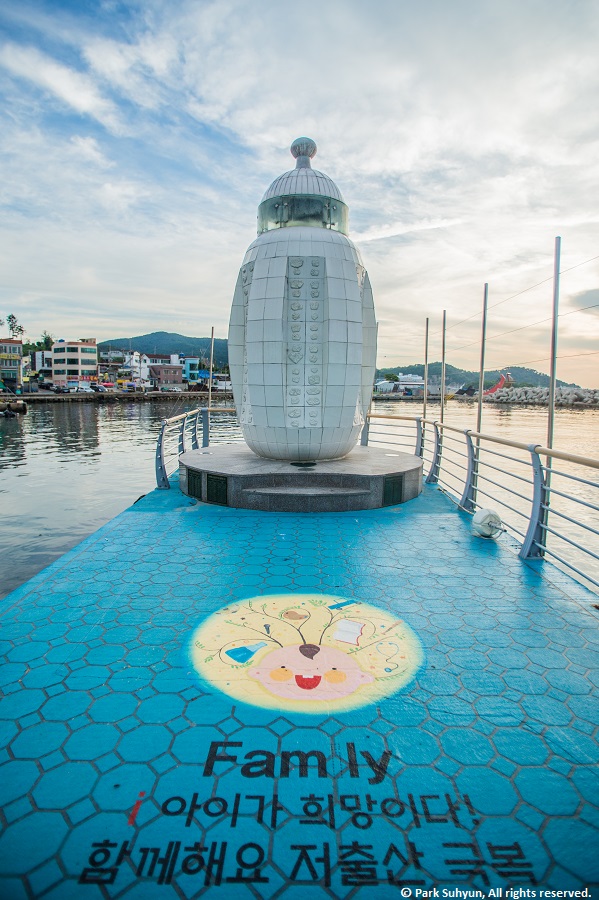 The Baby Bottle lighthouse is in Yeonhwa-ri, Gijang. It was erected as a part of a project to battle the nation's slow birth rate by signifying the importance of childbirth. The lighthouse is decorated with tiles adorned with the hand and footprints of 144 babies and children. 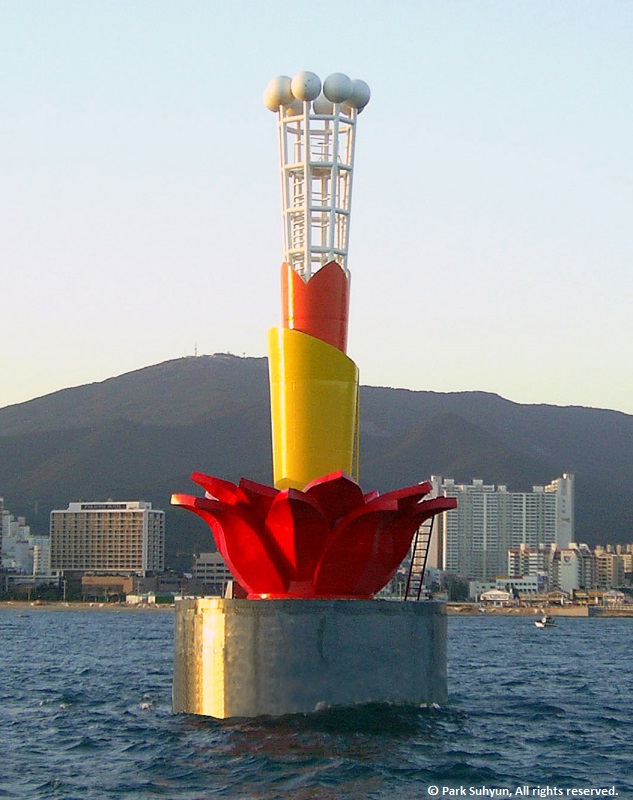 The Haeundae APEC lighthouse was built on the sea in 2005 to commemorate the APEC summit that occurred in Busan. The lighthouse is shaped like a flower to symbolize hopes of harmony and prosperity among the countries of Asia and the Pacific. 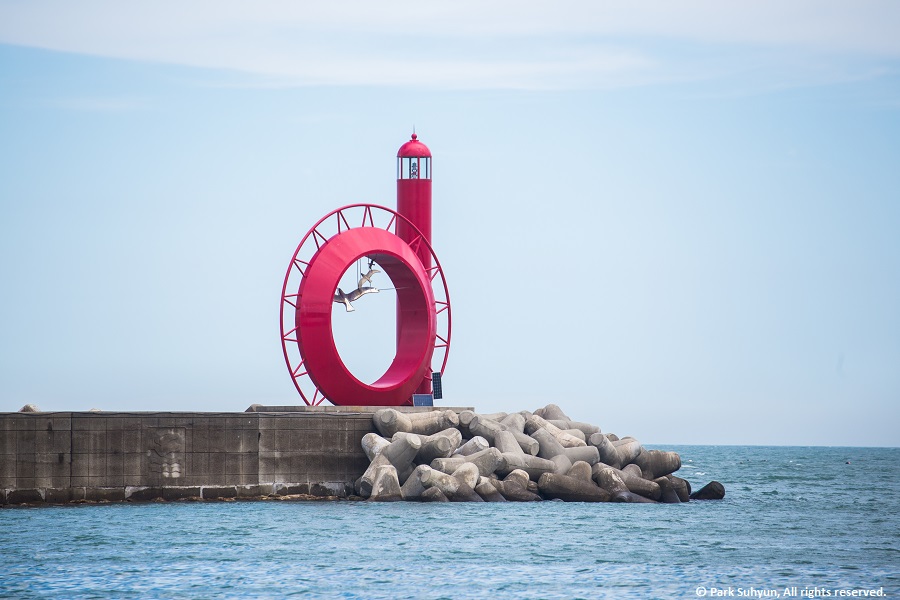 The Seagull lighthouse, built in 2012, and the Baseball lighthouse, constructed in 2011, are located in the northern part of Chiram Port in Gijang. The former presents three seagulls flying in a circle, which is shaped by the local name Haeoreum, which is Korean for "sunlight." 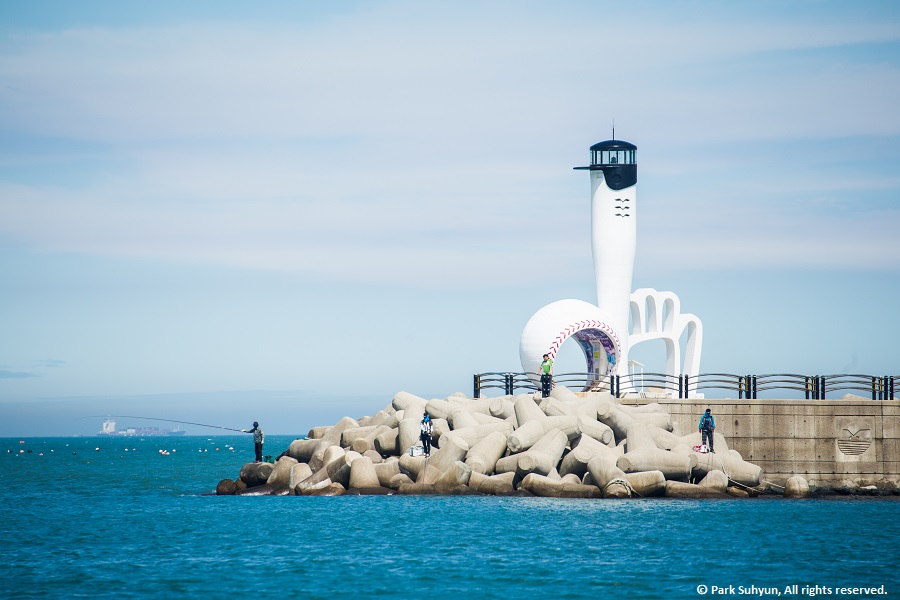 The latter lighthouse is symbolic of the importance of baseball to Busan. Inside, a photo of Lotte Giants pitcher Choi Dongwon, who died of colon cancer, is respectfully displayed. 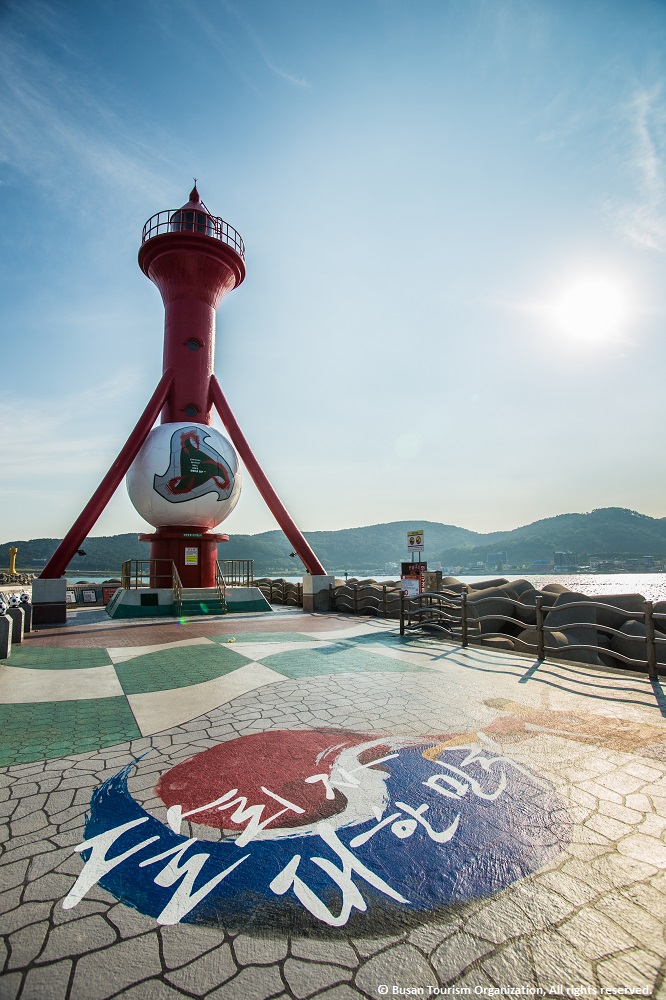 The 2002 FIFA World Cup was a historic moment for the nation and the city. To commemorate the global event, a lighthouse was constructed on the eastern part of the port of Daebyeon, Gijang-gun (county). The tournament's official ball was installed on top of the red tower. Scores of games, as well as the flags of participating countries, adorn the lighthouse's lower sections.

A jangseung, or village guardian, is a wooden pole that was traditionally placed on the outskirts of small villages to mark boundaries and to ward off malevolent spirits. Jangseungs were mostly installed in pairs. One would be called the Great General Under Heaven and the other the Female General Under Ground. A couple of lighthouses shaped like jangseungs on the waters of Daebyeon, Gijang, keep the coast safe at night and provide the area with a little extra tourism.